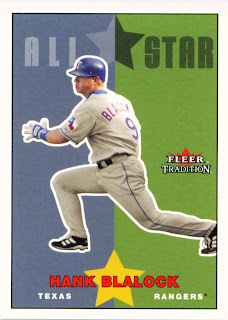 It's probably a violation of some sort of blogger code to feature cards of the same player two posts in a row. I'm doing it anyway with this 2003 Fleer Tradition Update #U216 that pictures Hank Blalock. This card came in yesterday as part of a surprise package from John at The Pursuit of 80's(ness). John and I didn't have a trade scheduled but he is a generous guy and sent me 36 or so Rangers cards in hopes I could use some of them. I had places reserved for this card and 12 others. That's a batting average that will get you called up with most clubs. Thanks John! Due to your generosity my day was better than Hank's.

In his first game at third base this spring, Blalock didn't do well. A first inning error was bad enough. Leaving the game in the fifth inning after bashing his head on a bench in the A's dugout while misplaying a pop foul was downright humiliating. Hank leaned over the railing too far and flipped completely upside down. His sunglasses gashed his face up and he got a black eye thrown in for free. Ugh. Hopefully Hank gets healed up quick.

Hank was playing third to get ready in case Michael Young needs a breather during the season. Mike spent his day with a young fan suffering from brain cancer. Carson Leslie and his family were guests of Michael and the Rangers on Thursday. Carson spent the game in the dugout with Young. From this article on MLB.com it seems like Young was doing this for more than just the positive publicity. Makes me extra glad the Rangers didn't lose him this last off season.

Speaking of losing players, Andruw Jones appears to be on his way out. While he has improved this spring, he hasn't been able to catch the Rangers current outfielders. Sounds like Monday is the deadline. He can opt to leave or take a minor league assignment. I am guessing he'll jet.

Congratulations to team USA in getting to the final four of the World Baseball Classic. Same to Pudge and the Astros for finalizing their deal. Ivan is to report to the club by Sunday. At least he's back in the National League and so not a worry for the Rangers.
Posted by Spiff at 2:38 PM