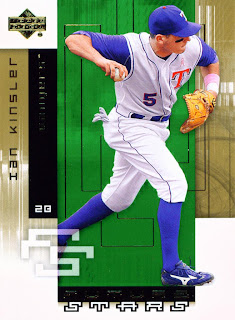 So Ian Kinsler has finally caught up with the team. The Rangers activated him off the DL today and he will start tonight against Seattle.

That's very good news for Texas fans and merits an appearance on today's card. Ian appears here on card number 95 of the 2007 UD Future Stars set. As best I can figure this picture was taken on May 13, 2007 in Arlington. That was Mother's Day and the Rangers beat the Angels 7-6.

Glad to have Kinsler back in the lineup and on the field. The team has missed him. Andres Blanco just doesn't have the bat Kinsler does and Joaquin Arias doesn't have the defense. To make room for Kinsler the team placed Joaquin Arias on the 15 day DL with a strained back. When Arias is ready to come back from the DL is when things will get interesting. There's going to be a shootout between Arias, Blanco, and Ryan Garko. The loser is going to get sent down to Triple A.

Arias has recently had the hot bat with a .312 average. Blanco has the defense at both middle infield positions. Garko has the advantage of being able to play both first and third base. Could be interesting to see who gets the bus ticket north.
Posted by Spiff at 7:46 PM