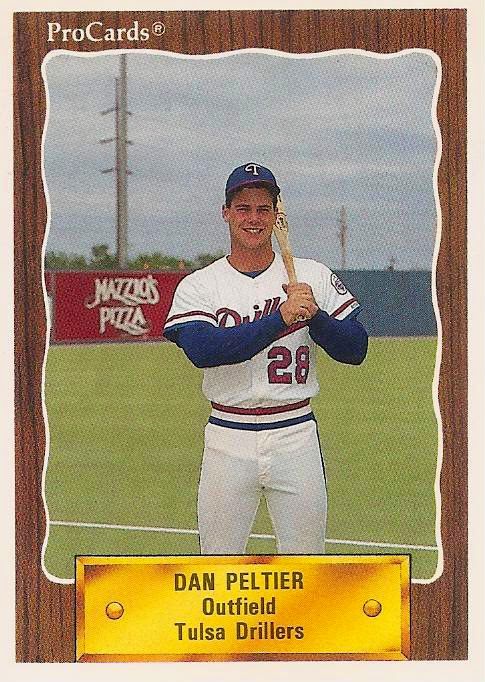 If you were a Rangers fan in the early 90's you probably remember the hype surrounding prospect Dan Peltier. Card 1168 of the 1990 ProCards Tulsa Driller team set was released in the middle of that buzz.

Texas took Peltier out of Notre Dame in the third round of the 1989 draft. They started him with the Butte Copper Kings in Rookie ball the same year. Over 148 plate appearances in 33 games with the Kings, Dan put on the wow. He compiled a .402 batting average and a .507 on-base percentage. His slugging percentage reached .648 thanks to his seven doubles, one triple, and seven home runs. He also stole ten bases while getting caught just once. 33 games is a pretty small sample but Dan was the man of the future following the 1989 season.

With much hoopla the Rangers scooted Peltier right past Single A and assigned him to Double A Tulsa for the 1990 season. He would play in 117 games for the Drillers in 1990 and find that the competition was much stiffer at Double A than in Rookie ball.

Over 497 plate appearances Peltier managed a .279 batting average and a .345 on-base percentage. He hit 20 doubles, four triples, and 11 home runs to bring his slugging percentage to .415. He repeated his ten stolen bases but got caught six times.

Dan played in the field in 110 games for Tulsa in 1990, all in the outfield. He committed eight errors to end the season with a .958 fielding percentage. That was a 17 point improvement over the previous season.

Dan Peltier's star returned to earth in Tulsa during the 1990 season. The improvement in his fielding was great but he showed he was human at the plate. While his offensive numbers were not blowing the doors off, they were still respectable. Enough so to earn him a promotion to Triple A Oklahoma City for the 1991 season.
Posted by Spiff at 5:00 PM