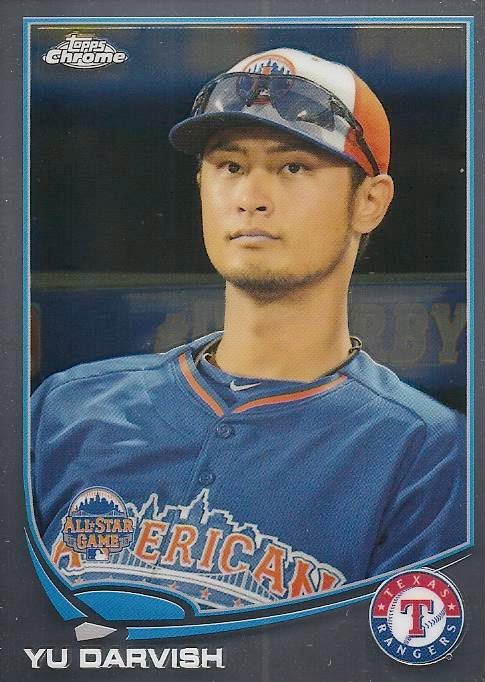 Well, it's the first seriously bad news out of Spring Training for the Rangers and it really couldn't get much worse. Yu Darvish, shown here on card MB-21 of the 2013 Topps Chrome set, is probably done for the season.

Darvish left a Spring Training game early on Thursday with forearm tightness. He said everything was fine but the pessimist in me feared the worst.

By this past weekend the Rangers were saying Yu has a mild UCL strain and might miss four months. Now it's a partial tear, Tommy John surgery is likely, and Darvish will probably be lost for the season.

This is about the worst news a club looking for a bounce-back season could get. Yu Darvish is a prima donna but he's also the best hurler Texas has. Derek Holland said he would step up and take Yu's place if needed. That might happen but who does that leave to take Dutch's place? I've got little faith in Yovani Gallardo and Ross Detwiler to be front of the rotation starters. Both are National League pitchers and the average NL pitcher gets hammered in the American League.

Going to be a tough season without Darvish. Hopefully this news isn't the first hint of a sequel to last year.
Posted by Spiff at 10:56 AM

That one hurts big time. Hopefully one of the hurt pitchers from last year can step up to be a front line starter. Also would help if Fielder and Choo played to their potential.