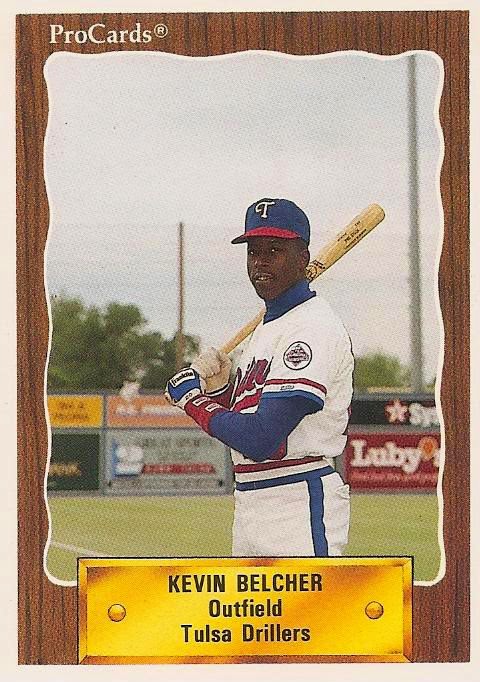 Kevin Belcher, shown here on card 1166 of the 1990 ProCards Tulsa Drillers team set, moved up to Double A to start the 1990 season. It was his fourth season in pro ball and his first at Double A. His 1989 season with Single A Gastonia had revealed some weaknesses in his defense and bat that needed work.

Belcher played appeared in 110 games for the Drillers in 1990 and made 484 plate appearances. He posted a .293 batting average (only three points lower than the previous season) and a .380 on-base percentage (23 points higher than in 1989). The increase in the on-base percentage was due in part to the 55 walks Kevin worked. That was 24 more than the year before but he also saw his strikeouts jump up by 26, to 88 on the season. His power also dipped as he managed 18 doubles, seven triples, and 11 home runs. The triples were the only extra base hits to see an increase.

Kevin played in just 69 games defensively for Tulsa, all in the outfield. He committed five errors and ended up with a .959 fielding percentage. That was a 19 point drop from his last season with Gastonia.

Unfortunately for Kevin Belcher, a large percentage of his key stats seemed to be trending in the wrong direction. Texas needed to know if this was a permanent trend or just a rough patch. They decided to take a look. When the rosters expanded in September, Kevin got the call all minor league players pray for, they wanted him in Arlington. He made his Major League debut on September 3, 1990 and spent the final month of the season with the Rangers.

Belcher appeared mostly as a pinch-hitter or pinch-runner for the Rangers but did put in 37 flawless innings in the outfield over the 16 games he appeared in. He made 17 trips to the plate and struggled to a .133 batting average and a .235 on-base percentage. His only extra base hit was a double.

What the Rangers saw from Kevin Belcher in September of 1990 was not anything to turn heads or convince them to keep him in the Majors. It was enough to keep him in the organization. He would return to Tulsa to start the 1991 season with the Drillers. Four seasons in, it was time to make his move if he wanted to see Arlington again.
Posted by Spiff at 8:39 PM