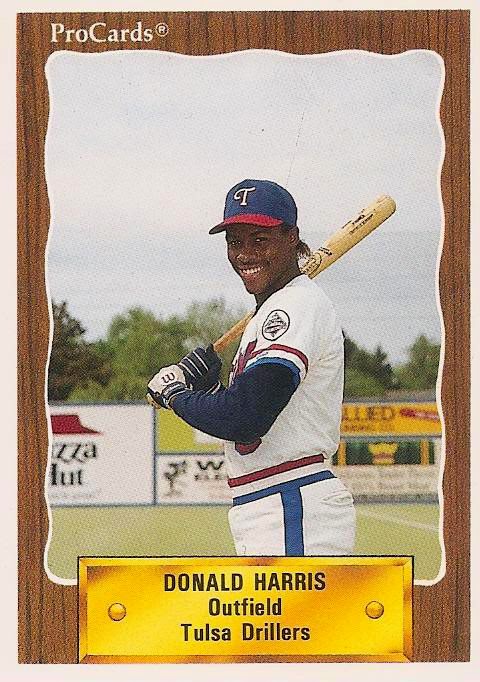 Donald Harris, seen here on card 1167 of the 1990 ProCards Tulsa Drillers team set, was the Rangers first round pick in the 1989 draft. He was the fifth pick overall. The Rangers sent Harris to the Rookie League Butte Copper Kings to start his pro career.

Donald did well in 1989 and earned a promotion to Single A Gastonia for the start of the 1990 season. He did not blow the doors off in Gastonia.

Harris made 241 trips to the plate over 58 games for the Gastonia Rangers and posted a .208 batting average. He hit ten doubles and three home runs. He did walk 14 times but also struck out 63 times. His on-base percentage totaled to .262. He also made five errors in the outfield en route to a .957 fielding percentage.

None of those numbers are very impressive but Texas moved Donald up to Triple A Tulsa midway through the season. He appeared in 64 games for the Drillers and made 226 trips to the plate. He struggled with the adjustment, posting a dismal .160 bating average and .197 on-base percentage. He hit five doubles, one triple, and one home run while walking just seven times. He struck out 69 times. His defense did not improve either as he committed eight errors to end the season with a .942 fielding percentage.

Donald Harris had his work cut out for him in 1991. As a first round draft pick he would get a little more leeway than other players but he needed to pick it up if he was going to make good. The Rangers were dis-inclined to send him back to Double A for 1991 so he would have to make his adjustments and improvements in Tulsa. He needed to make them fast if he wanted to get a ticket to Triple A Oklahoma City or even higher.
Posted by Spiff at 2:13 PM