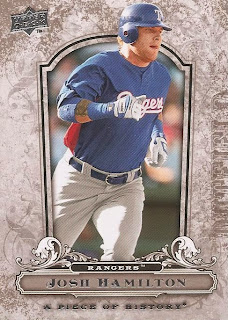 So the Rangers ran their win streak to six yesterday to make their record 6-1 on this road trip. The 10-8 victory also puts them to within one game of .500. They've moved into third place in the American League West and scored more runs than anyone else in May.

Along with the rest of the offense, Prince Fielder's power has returned. He's been hammering long balls like it's going out of style. The bullpen also appears to have solidified some and the starting pitching has been surprisingly good.

Is any of that what folks are talking about? Not really. The topic of conversations seems to be the return of Josh Hamiltion, shown here on card 94 of the 2008 Upper Deck A Piece of History set. For several weeks Rangers fans have been getting regular updates on Hamilton's progress during his rehab stint in the minors. Over the weekend it was announced he would be re-joining the team when they arrived in Cleveland. Sunday evening there were in-game reports that he had arrived in Cleveland. Yesterday he was in the Rangers lineup for the first time since 2012. He went 0-for-3 with two strikeouts, a walk, and a run scored against the Indians.

Not the most earth-shaking return for Josh, but maybe that's a good thing. If he can come in and help the team while avoiding the spotlight that would probably be best. If he can put together some good numbers on this road trip that would be better. Might help ease the return to Arlington. It's going to be interesting to see this play out though. Hopefully this move helps the Rangers and Hamilton.
Posted by Spiff at 11:39 AM