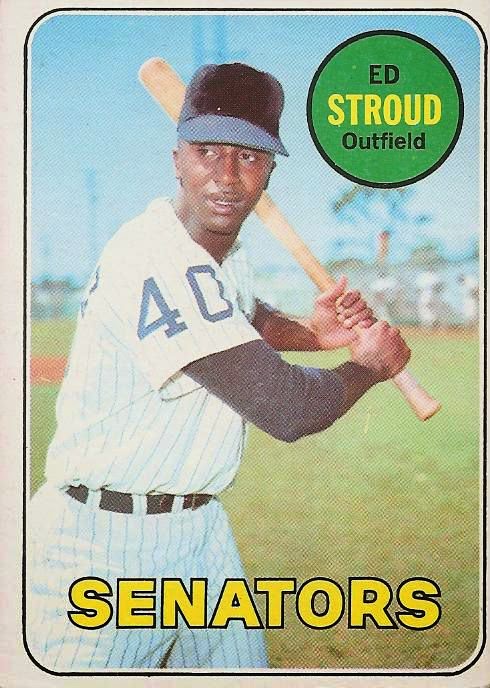 There is no excuse for the photo of Ed Stroud Topps used on card 272 of the 1969 Topps set. I'm not sure if this is a minor league uniform or from when Ed was with the White Sox. Either way, Topps should not have used it. After all, they had a photo of Stroud in a Senators uniform they used on his 1968 Topps card. At least they could have re-used that picture.

Coming into 1969, Ed Stroud was the Senators starting right fielder. The mid-season acquisition of Lee Maye knocked Stroud out of the starting role and cut into his playing time. Even with that happening, Ed still played in 123 games for Washington and made 240 trips to the plate. He posted a .252 batting average and a .353 on-base percentage. He had a bit of power as his five doubles, six triples, and four home runs showed. Stroud scored 35 runs of his own and bumped in 29 more.

Meanwhile Ed played in all three outfield positions during the course of the season. His appearance in center was a one game two inning cameo but he had significant time in both corner positions. He played 110.2 innings in left field over 26 games. He committed no errors in center or left. Of course, Stroud was primarily a right fielder and he played 331.1 innings over 59 games there. He muffed two plays for a .976 fielding percentage. That was two points higher than the league average. Ed had significantly less range than the league average though and that probably helped open the door to a challenge for playing time from Lee Maye and Sam Bowens.

Ed didn't have a bad season for Washington in 1969. In spite of Maye's arrival he actually had a little more playing time than the previous season. He used the extra plate appearances to raise both his batting average and on-base percentage. It was a step in the right direction but the Senators outfield was crowded and breaking in full-time in 1970 would be a tough task.

Spiff, That's almost surely a White Sox uniform. The White Sox and the Tigers were the only 2 teams that used "TV numbers" on the players' sleeves, if I recall correctly.

Stroud just passed away a few years ago, which I noted on my 1960s Baseball blog at the time.