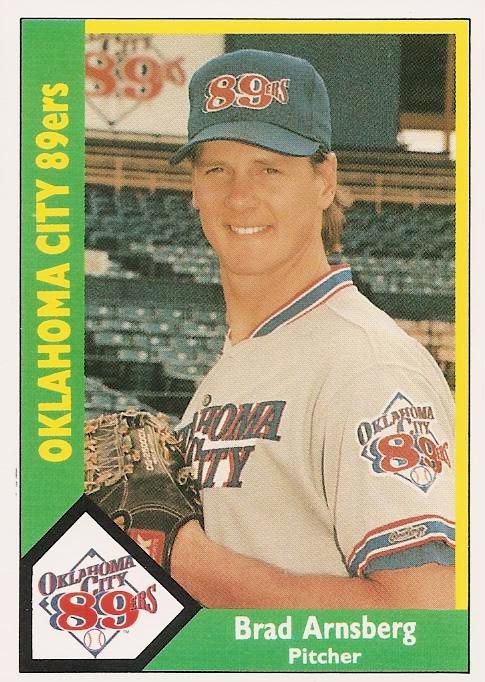 By the time Brad Arnsberg appeared on card 157 of the 1990 CMC set he already had some Major League time under his belt. Originally debuting with the Yankees in September of 1986, Brad split the 1987 season between Triple A Columbus and New York.

In November of 1987 the Rangers sent Don Slaught to The Evil Empire in exchange for Arnsberg. There were some concerns since Brad ended the 1987 season in the Disabled List for a right elbow problem but Texas thought he would be good to go in 1988. That was not the case. Brad re-injured the elbow in Spring Training and underwent Tommy John surgery on April 6, 1988. He missed the entire season in rehab.

Coming back from the injury in 1989, Arnsberg won a spot on the Rangers Open Day roster as the long reliever. He struggled though and Texas sent him down to Triple A Oklahoma City on May 22, 1989. Brad spent most of the rest of the season with the 89ers, returning to Arlington on September 2, 1989. He finished out the season with the Rangers.

Brad failed to win a spot on the roster to start the 1990 season and was assigned to Triple A. The 89ers experimented with using Arnsberg as a starter, giving him three starts in the 14 games he appeared in. He was noticeably better out of the bullpen though and it didn't take long for him to get back there.

Over the 29.2 innings he pitched, Arnsberg put up a 5.16 ERA and an 1.517 WHIP. This is where the difference between starting and relieving shows up. The above numbers are combined. In his three starts Brad went 0-3 and posted a horrendous 10.33 ERA over 11.1 innings pitched. Out of the pen Arnsberg lasted 18.1 innings and put up an impressive 1.96 ERA. He did not allow a single run in his last 7.1 innings pitched over six games with OKC.

Needing relief help, the Rangers purchased Brad's contract from the 89ers on May 26, 1990. He would go on to see heavy use and put together a very decent season, all in relief. He would not be back to Triple A for the remainder of the season.
Posted by Spiff at 2:33 PM