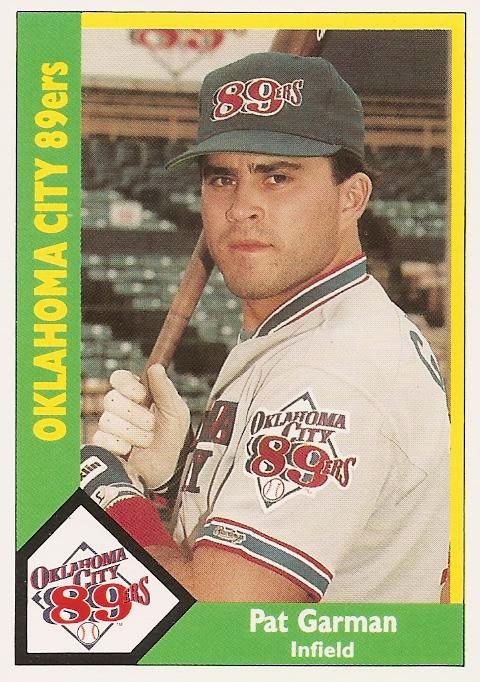 James Patrick Garman, shown here on card 162 of the 1990 CMC set, is something of a mystery. It's always a challenge to find information on minor leaguers and there are several questions left unanswered about Pat.

The Rangers started Garman with the Rookie League Gulf Coast Rangers. He got one plate appearance there and struck out. I have no idea why he didn't play more. An injury? Delay from holding out before signing? Based on his record with Seattle, the latter is a definite possibility.

Garman split the 1988 season between low A Gastonia and Single A Charlotte. He started 1989 with Charlotte but ended the season with Triple A Oklahoma City. There was no stop at Double A and again, I'm not sure why.

In seven game with Tulsa, Garman made 26 plate appearances. He posted an impressive .360 batting average and a .385 on-base percentage. He didn't have a lot of power but did manage two doubles, a triple, and a home run. in six games at third base he committed two errors for an unsightly .889 fielding percentage.

Over 19 games with the 89ers Pat went to the plate 62 times. He compiled a .236 batting average and a .323 on-base percentage. He got a double, a triple, and a home run. In 16 games at first base Garman committed just one error for a fielding percentage of .993.

Based solely on the numbers and the assignments the previous season, I suspect Garman started 1990 at Triple A and struggled before being re-assigned to Double A. He must have gotten hurt after only a short time there. In the alternate, he could have started the season with OKC, gotten hurt, and come back with Tulsa towards the end of the year.

Whatever happened, Pat Garman's 1990 season was abbreviated. He would be back in 1991 but it would be with the Double A Tulsa Drillers.
Posted by Spiff at 2:42 PM