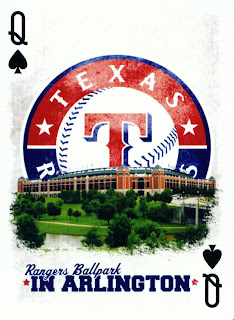 Apparently the Rangers like seeing the view shown on this playing card put out by Academy Sports and Outdoors. After losing the last two games of the road trip they came into tonight's home game tied for first with the Angels and stumbling.

Texas looked to C.J. Wilson to try and right the ship. He did his dead-level best as he went seven innings while allowing just one Halo to cross home. Angels starter Ervin Santana matched zeroes with C.J. until the bottom of the fourth inning.

Two quick outs in the inning and it looked like the deadlock would go to the fifth. Then Nellie Cruz and David Murphy singled. Mike Napoli walked. Mitch Moreland knocked in Nellie and Murph with a single to get the scoring started.

That would be it in the fourth. In the fifth Texas would add four more to bring the score to 6-0. Anaheim pushed one across in the seventh but the Rangers got it back in the eighth. Final: 7-1 Texas. Hello win column and first place.

Very nice to see the win. The last two games in New York were ugly affairs and the Angels were on a roll so I was a little apprehensive about tonight's matchup. Good outcome though.

Sorry about no posts on Friday and Saturday. Got really busy on Friday and didn't realize until I was in bed that I hadn't posted. Gone all day Saturday to a Civil War Day. I guess at least I didn't have to listen the loss on Saturday that way.
Posted by Spiff at 10:02 PM

Your title said it best. It was nice to wake up to go to work and see that score.