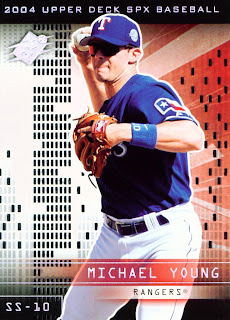 So the Rangers are finally back in sole possession of first place in the American League West. Not only that but I got to hear the game today thanks to it being a day game on the west coast.

Colby Lewis took the mound against the A's in Oakland following the loss there last night. Texas really needed to win this one to break up the developing losing streak. Lewis needed a good showing since he had gotten roughed up in his last couple of starts.

Well, maybe it was being close to home but Colby found his groove. Even though he didn't have his best stuff he managed to hold Oakland to just two runs through eight innings.

Of course those two runs would be enough to sink him if the offense hadn't come through. They did though and in a big way. Michael Young, seen here on card number 21 of the 2004 SPx set, hammered his first home run of the season. The two run shot put Texas up 3-1. Nelson Cruz and Mike Napoli both launched in the fifth inning to set the lead at 7-2. In the eighth and ninth innings the guys managed to add four more runs. Final score: 11-2 Texas.

Nice way to play against a division opponent. No errors, good pitching, and hot bats.
Posted by Spiff at 7:58 PM

Man, that was much needed on several levels. If Lewis can get back to form, I'll feel great about the Rangers chances!