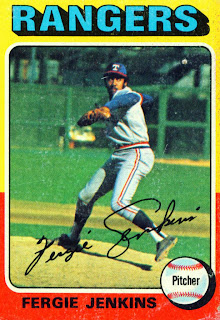 Coming off a stellar year in 1974 the Rangers were hoping that Fergie Jenkins would continue his lights-out performances. That wasn't to be. Jenkins, shown here on card 60 of the 1975 Topps set, probably didn't have a bad year for a pitcher who hadn't had his 1974 season. It looked bad though against that backdrop.

Fergie appeared solely as a starter for Texas in 1975. In the 37 starts he made he would toss 270 innings and 22 complete games. His ERA jumped to 3.93 while his WHIP climbed to 1.174. Although he struck out 157 batters he also allowed a league-leading 37 home runs. At least that was the old Fergie. He had already led the league in home runs allowed five times previously.

1975 was a letdown for Jenkins and the Rangers. While still a workhorse for Texas Fergie was not the ace he was in 1974. All told he was probably the number three starter that year. That's not bad but when you're Fergie Jenkins it qualifies as an off year.

Apparently the Rangers had their doubts as to if Jenkins would be able to regain his 1974 form. In November of 1975 he was shipped to the Boston Red Sox for Craig Skok, Steve Barr, and Juan Beniquez.

As an interesting side note, the trivia question on the back of this card asks which country western singer once played minor league ball. The answer is Charlie Pride, now a part owner of the Texas Rangers.
Posted by Spiff at 5:59 PM

I did not know that Charlie Pride had a stake in the Rangers, interesting.

Charlie attends Rangers games on a regular basis. I've seen him at games a number of times.