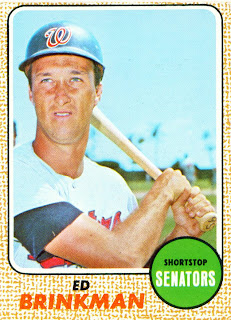 Something about Ed Brinkman's picture on card number 49 of the 1968 Topps set looks a little off. Was Ed's neck as long as it seems here or is there some kind of illusion going on?

Brinkman's .187 average in 1968 almost seems like an illusion. Even for the era of light-hitting middle infielders that wasn't even close to good. In 215 plate appearances Ed managed only 36 hits. He had no home runs and only six RBI on the season. He struck out 31 times and walked only 19 in route to a .259 on base percentage.

The offensive numbers were probably why Ed platooned at short with Ron Hansen. Brinkman was actually pretty decent on defense. In 304 chances in '68 he made just 10 errors. That gave him a .967 fielding percentage, five points higher than the league average.

1968 would not be Ed's last year with the Senators. It would however be his last as the Big League ball player of the family. In 1969 his brother Chuck would debut as a catcher for the Chicago White Sox.
Posted by Spiff at 3:58 PM

When I got this card back in '68, I thought it looked like he was missing a pair of glasses, both because of his blank, deer-in-the-headlights stare, and the dark spots aside his nose that glasses-wearers get.

There is definitely something odd about his face.