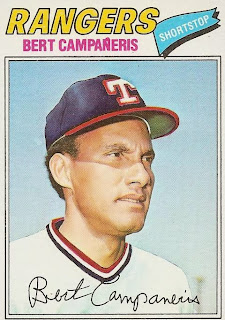 On November 17, 1976 The Texas Rangers signed Dagoberto Blanco Campaneris to a five year contract. The team hoped Bert, shown here on card 373 of the 1977 Topps set, could bring some speed to the team and improve the defense. With the acquisition of Campy, Toby Harrah moved from short to third and displaced Roy Howell.

Campaneris was not known as a slugger or heavy hitter. Prior to coming to Texas he had not hit .300 in a season. That trend would continue with a .254 batting average and a .314 on-base percentage in 648 plate appearances in 1977. Both numbers were a slight drop from the previous season but nothing disastrous. Bert also led the league with sacrifice bunts, he laid down 40. Slightly concerning was Campy's performance on the bases. He stole 54 bases for Oakland in 1976. That was a spike for him and he dropped back down in 1977 with 27 thefts. Disturbingly, he led the league in caught stealing with 20.

In the field Campaneris logged 1284.1 innings at shortstop over 149 games. He didn't play any other position. Bert saw 777 chances at short and handled all but 25 of them without a problem. That gave him a .968 fielding percentage, five points higher than the league average. He also had much more range than most other shortstops in the league. That increased range probably accounted for some of his errors.

Bert Campaneris definitely filled a hole for Texas at shortstop. His defense was all that it was advertised to be and he was a steadying influence on rookie Bump Wills. His bat was light but that was expected. What was the concern was the drop in speed. Not only did his stolen base numbers drop but he was getting caught more often. That was something for Texas to keep an eye on going forward.

For the time being though Campaneris was doing well. He was selected to the All-Star team. Unsurprisingly, he played in the game but didn't bat.
Posted by Spiff at 12:40 PM