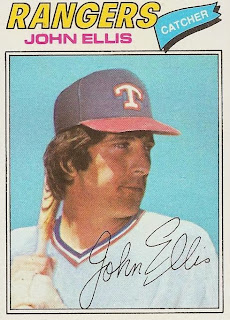 Even though John Ellis was starting his second season with the Texas Rangers in 1977 Topps apparently was unable to come up with a picture of him in a Rangers uniform. The result was an atrocious air brushing job on card 36 of the 1977 Topps set. Of course, the lack of a proper picture could have been due to Ellis' limited playing time in 1976.

John came into Spring Training in 1977 still rehabbing from the devestating injury that cut his 1976 season short. He ended up being assigned the backup role to catcher Jim Sundberg and first baseman Mike Hargrove. He would also see some action throughout the season as the designated hitter.

Ellis appeared in 49 games in 1977 and made 127 trips to the plate. He posted a .235 batting average and a .283 on-base percentage. Both were low and likely partially attributable to having missed so much of the previous season.

In the field John would play 68 innings over 16 games at catcher. He committed no errors behind the dish but caught just 11% of runners stealing on him. Ellis would also play 54 innings over eight games at first base. Once again, his defense was flawless.

John Ellis was still not at 100% in the recovery process from his 1976 injury but he was making progress. He also seemed to be settling into the role of backup and was apparently working out well. Some improvement with the bat and a few more runners caught would be nice but probably wouldn't win him a starting role in 1978.
Posted by Spiff at 1:39 PM