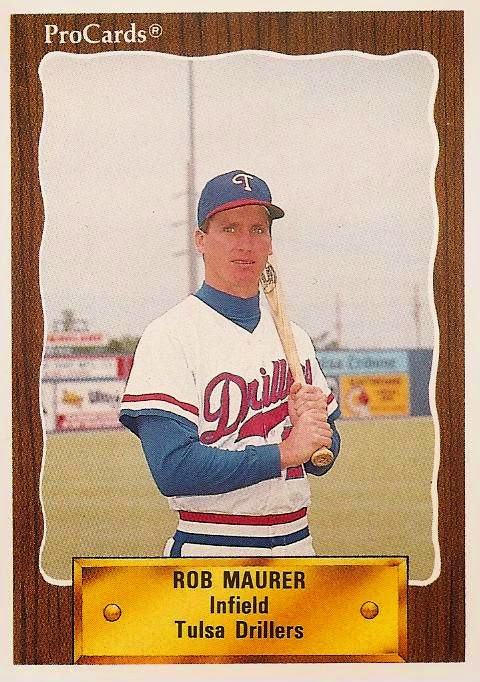 The Texas Rangers selected Rob Maurer in the 6th round of the 1988 June Draft. He started his pro career the same year with the Rookie League Butte Copper Kings. By 1990 Maurer, shown here on card 1163 of the 1990 ProCards Tulsa Drillers set, had worked his way up to Double A.

Rob appeared in 104 games for the Drillers in 1990. 99 of those games were at first base - the only position he played. That easily made him the starting first baseman for the club. Maurer saw 1022 chances at first and committed 11 errors for a .989 fielding percentage.

Maurer made 429 trips to the plate for Tulsa and put together an even .300 batting average. He walked 54 times to help bump his on-base percentage up to .396. He did strike out 112 times (team high) but his .578 slugging percentage helped overshadow that. The 31 doubles (second highest on the team), four triples, and 21 home runs (team best) he hammered showcased his power.

Rob Maurer turned in another solid season with the bat in 1990 in spite of his high numbers of strikeouts. He needed to cut those down and get his glove polished up a bit but those were things the Rangers were willing to take a chance on. Maurer would be moving up to Triple A Oklahoma City to start the 1991 season.
Posted by Spiff at 5:50 PM