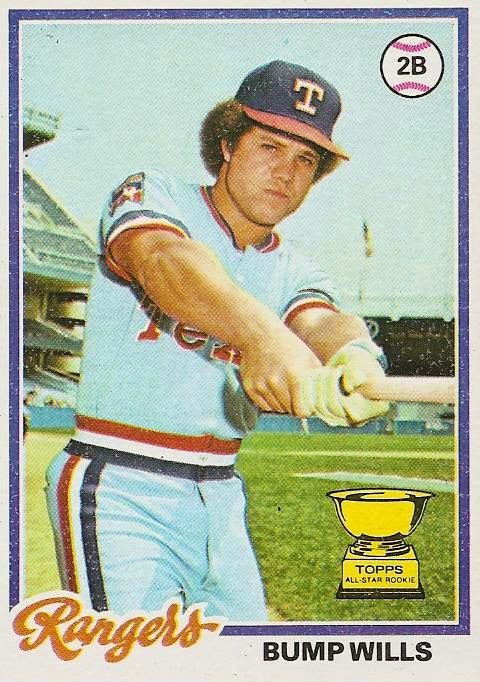 Coming off a drama and excitement filled rookie season in 1977, a lot was expected from Bump Wills in 1978. Wills, shown here on card 23 of the 1978 Topps set, was one of the players Texas planned to lean on. That's why he appeared in 157 games for the Rangers in 1978 - the most of any player that year.

Wills' spent the entire 1978 season at second base. He played no other position and appeared at second in a league high 156 games for Texas. Over the 1336.1 innings he played there he committed 17 errors (second highest in the league at second) for a fielding percentage of .981. That was just about even with the league average .980. The number of errors was in part attributable to the fact that Wills had the highest range of any second baseman in the American League. He made more errors than a lot of second basemen simply because he was getting to more balls than most other players were.

Bump made a team high 619 trips to the plate for Texas in 1978 and put together a .250 batting average. That was 37 points lower than the previous season but it could have been worse. As late as September 4th he was batting just .229 but a late-season surge brought his average up. Wills' on-base percentage also dropped by 30 points to .331. He did manage to lower his strikeout totals by five to 91 but his walks also dropped a hair to 63 on the season. Bump also suffered a power decline as he popped just 17 doubles, four triples, and nine home runs. His speed came up though as he stole a then club record 53 bases (third highest in the league) while getting caught just 14 times.

Clearly Bump Wills had encountered the dreaded sophomore slump. His defense held up though and his speed was impressive. He still had too many strikeouts but that was something he could work on. If Wills could rebound offensively in 1979 he would have no problem holding on to his starting job at second base for the foreseeable future.
Posted by Spiff at 11:01 AM