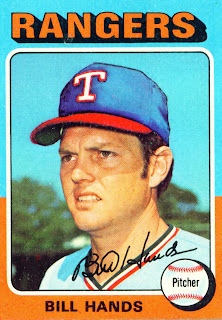 The Rangers grabbed Bill Hands off waivers from the Twins on September 9, 1974. As such he had just a couple of appearances with the 1974 team. For all intents and purposes 1975 was his first year with the team. It is perhaps fitting then that Topps heavily airbrushed card number 412 of the 1975 Topps set in order to get Bill into Texas threads.

Bill had a rough season in 1975. On June 9th he pulled a calf muscle and was out of action until the 27th. In August his back started acting up and forced him out of action for the remainder of the season. Perhaps the expression of Bill's face isn't hostility but pain.

Due to the two stints on the Disabled List, Hands had just 18 appearances with the Rangers in 1975. All 18 were starts and he ended the season with a 6-7 record. In 109.2 innings pitched Bill posted a 4.02 ERA and a 1.331 WHIP. His strikeout to walk ratio was pretty good as he struck out 67 batters while walking 28. Aside from the strikeout to walk ratio the numbers seem to reflect his difficult year.

It is often thought that when a player ends up on waivers he has been struggling. This was true of Bill Hands. In 1974 his ERA had gone over 4.00 for the first time since 1966. His WHIP had also risen for three straight years. With Texas in 1975 he managed to lower the ERA but the WHIP continued to climb.

The consistently rising WHIP coupled with the injuries that cost him almost half the season sounded the final bell for the 35-year-old Hands. In Feburary of 1976 the Rangers traded him to the New York Mets for George Stone. Neither player would ever see Major League action again.
Posted by Spiff at 3:54 PM

Great write up Spiff. He looks a little disgusted with that air brush job.