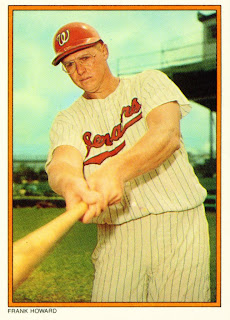 The expansion Senators never encountered much success in the eleven years they were in Washington. After Bob Short bought the team under a mountain of debt they also experienced financial problems. The end result was that Short obtained permission to move the team to Texas following the 1971 season. The few fans the Senators had left were not impressed.

September 30, 1971 was the Senators' final game. They were slated to host the New York Yankees. 14,460 fans showed up and paid the admission to get into the last Major League Baseball game in RFK Stadium. There were rumors though that the security guards left early and several thousand more fans simply walked in for free. One estimate placed the total attendance at 25,000.

Most of the Senators players received applause when they appeared. Frank Howard, shown here on card 23 of the 1985 Topps Circle K set, got a thunderous ovation when he strode to the plate. Many fans were obviously upset by the imminent departure of the team. Signs began appearing around the stadium ridiculing Bob Short. As soon as security removed a sign another would appear. One of the ones that received the most acclaim was one that read simply, "Short stinks."

By the bottom of the sixth inning the Yankees were leading 5-1. Suddenly the Senators came alive and plated four runs to tie things up. The lead-off hit in the inning was Frank Howard's 26th home run of the season. That bomb seemed to lift the spirits of the crowd and even got to Howard himself. As he ran the bases he tipped his helmet to the fans for the first and only time. As he approached the dugout he tossed his cap into the stands.

In the eighth Washington put two more runs on the board to take a 7-5 lead. That held through two outs in the top of the ninth. By this point the crowd had turned ugly again and was calling for Bob Short's blood - literally. One sportswriter of the time compared it to a lynch mob in full swing. Already fans had rushed the field and been cleared off.

With two outs in the top of the eighth the crowd rushed the field again. Swarms of young people snatched tufts of grass and anything else they could get their hands on. One young man even made off with first base. Those remaining in the stands expressed their approval. The scene was total pandemonium.

With the crowd going wild, no security in sight, and only three bases remaining the game was called as a forfeit. Official score: 9-0 in favor of New York. Perhaps it was a fitting epilogue for a team that had struggled fruitlessly for much of eleven seasons.
Posted by Spiff at 12:36 PM