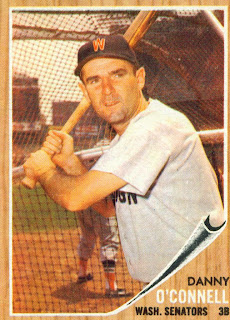 Danny O'Connell, shown here on card 411 of the 1962 Topps set, was in the middle of the Senators' struggles at third base in 1962. After a comeback season in 1961 he split his time in 1962 as a backup for third baseman Bob Johnson and second baseman Chuck Cottier.

Most of Danny's defensive time was at third base. He put in 319 innings there in 41 games. He committed five errors at the hot corner for a .961 fielding percentage - nine points higher than the league average. At second he would see action for 167 innings over 22 games and commit five errors there as well. His .946 fielding percentage was well below the league average .980.

O'Connell made 268 plate appearances on the other side of the game. He managed to bump his batting average up to .263 but his on-base percentage dropped 34 points to .327. Danny also slowed down as he stole just five bases. Perhaps more ominously than anything else was the fact that his doubles dropped to seven. That was less than a quarter of the number he had hit the year before with a little over twice as many at-bats.

Danny's dropping on-base percentage and doubles production seemed to be signs that the end was near for his playing career. It turns out it was. After 26 games at Double A in 1963 Danny and the Senators parted ways. That would be the end of the line for his pro career.
Posted by Spiff at 12:01 PM