It's Valentine's day in Boston. 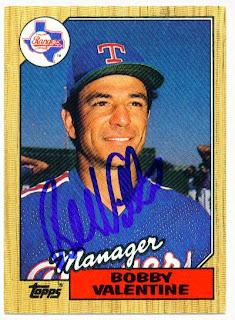 MLB.com is reporting that the Red Sox will introduce Bobby Valentine as their new manager this evening at Fenway Park. Bobby V was the Rangers manager from 1985 to 1992. I am showing him today on a 1987 Topps card that he signed for me through the mail in 2008.

Valentine was the first Rangers manager that I can really remember. Doug Rader would have still been in place when I first latched onto the team but I have no memory of him. Valentine I remember and always enjoyed watching. I'm not the only Rangers fan who remembers Bobby. Until Ron Washington's recent postseason successes he was probably the most popular manager in Rangers history behind Johnny Oats.

After leaving the Rangers Bobby managed the Mets from 1996 to 2002. Not a bad stint for such a volatile environment. It probably helped that the Mets had several postseason appearances during his tenure.

Boston is probably closer to New York than Texas when it comes to the atmosphere and pressure of managing. Unlike New York though, the Red Sox are Boston. No shadow of the Evil Empire there, all the focus is on the Sox. Hopefully Bobby V will be able to deliver some success to the franchise and placate the fans and media. It would be nice to see him back in the Bigs and doing well. Not too well of course, can't root for Bobby over the Rangers.
Posted by Spiff at 1:46 PM