Hope everyone had a great Christmas. Taking the rest of this week off to spend with family so the posts will be pre-recorded. Letting you know in case I miss a major Rangers development. Going to finish up the 1989 ProCards Gastonia Rangers team set today. I have previously posted all the players and am now down to the coaching staff. Since the staff is rather hard to research I will be combining them all in this post. 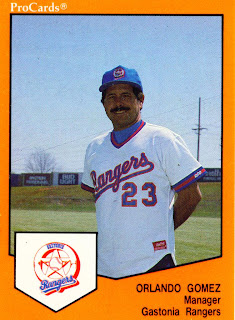 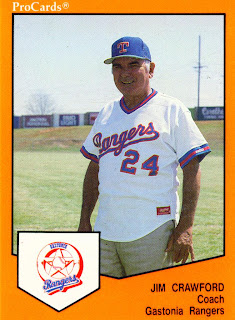 Coach Jim Crawford appears on card number 1015. 1989 was his first year as a coach in professional ball after twenty years in the collegiate ranks. Can't find much information on Jim so I have no idea where he's at today. 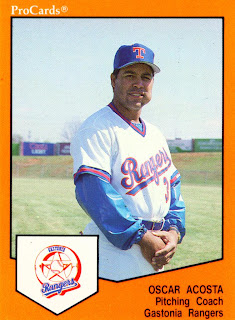 1989 was also pitching coach Oscar Acosta's first year as a coach at the professional level. Acosta, shown here on card number 1025, played in the Phillies' minor league system for three years in starting in 1978. He must have liked coaching because he moved into minor league managing in 1999. He managed in 1999 in the Cubs system and in 2004 and 2005 in the Yankees system. Oscar passed away in April of 2006 at the age of 49. 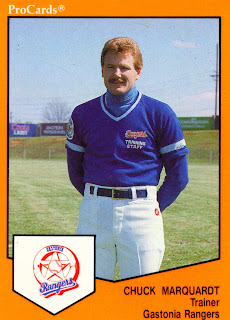 Trainer Chuck Marquardt appears on card number 1010. It's almost as hard to find information on Chuck as it is on Jim Crawford. 1989 was Chuck's second season with the Rangers organization. He had previously served in the Navy and worked as a high school trainer and at the University of Washington. He also taught sports medicine in the off-season.

Well, that wraps up the 1989 ProCards Gastonia Rangers team set. Doesn't wrap up my minor league collection though so Minor League Monday will continue.
Posted by Spiff at 12:05 PM