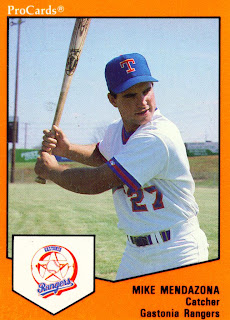 The Rangers signed Mike Mendazona as a free agent on June 7, 1988. That was about a month and a half before they signed another catcher, Ivan Rodriguez. That set up a big hurdle for Mike, shown here on card number 1026 of the 1989 ProCards set.

Unlike his drafted teammates, Mendanzona started his career with the Rookie level GCL Rangers in 1988. In 71 plate appearances he posted a dismal .183 batting average and a .280 on-base percentage. He committed just three errors in 134 chances though. His glove is likely what got him promoted to Single A for the 1989 season.

With Gastonia Mike's offensive woes continued. He made 147 plate appearances and posted a barely improved .188 batting average. His on-base percentage dropped to .250 while his strikeouts jumped. In fact Mike struck out 16 times in the course of the season while walking just 11 times. That might work for a thumper but Mendazona wasn't a power hitter.

If there was any improvement to Mike's game it was on defense. He again committed three errors on the season but this time they came in 318 chances. That pushed his fielding percentage up to .991. One possibly disturbing point was that his number of passed balls climbed from six the previous season to 15 in 1989.

Things just hadn't come together for Mike Mendazona in 1989. In spite of his defense, Ivan Rodriguez had blown past him. Mike had really needed his bat to show up for the season and it just hadn't. In fact, things had gotten worse. Apparently the Rangers weren't convinced they were going to get better either - 1989 would be Mike Mendazona's last season in pro ball.
Posted by Spiff at 12:23 PM