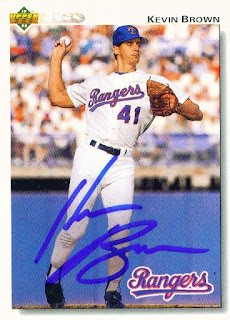 Number 13 on T.R. Sullivan's Fifty Best seasons in Rangers history is Kevin Brown's 1992 performance. I got this 1992 Upper Deck card of Brown signed back before he was really well known as a head case.

Issues or not, Brown wasn't a bad pitcher before he landed with the Yankees in 2004. 1992 wasn't the best season of his career but it was the best he had with Texas.

Those numbers made Kevin both the workhorse and ace of the Rangers pitching staff. They also garnered him some Cy Young consideration and a start in the All-Star Game. I believe that makes him the only Rangers pitcher to ever start an All-Star game.
Posted by Spiff at 12:32 PM

Exactly the piece of information I was looking for! Thanks so much!