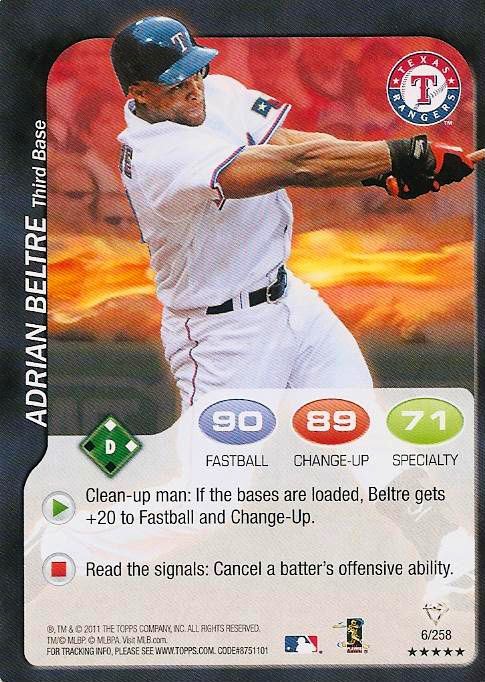 Well, the Rangers started the 2014 season at home against the Phillies on Monday. Seems wrong to start the season against a National League team. Even more so to lose the opener 14-10. Terrible pitching to say the least.

Last night's game was almost a polar opposite. no runs scored at all until the sixth inning. The Phillies grabbed two runs off starter Martin Perez in the top of the inning to knock him out of the game after a great first appearance of the season. In the bottom of the inning the Rangers got a run back.

In the bottom of the seventh Adrian Beltre, shown here on card 6 of the 2011 Topps Attax set, hammered a doubled to knock in new Ranger Shin-Soo Choo with the tying run. That was all the scoring until the bottom of the ninth when it was once again Beltre at the plate. That time he stroked a single to bring in Choo with the winning run. First walk-off win of the season.

Great to see Beltre back in form. Very encouraging after game one to see a strong start and scoreless appearances by the bullpen. Choo reaching base four times as the lead-off hitter is very nice as well. Glad to have some bright spots. Hopefully they continue and Prince Fielder and Mitch Moreland join the party soon.
Posted by Spiff at 11:15 AM