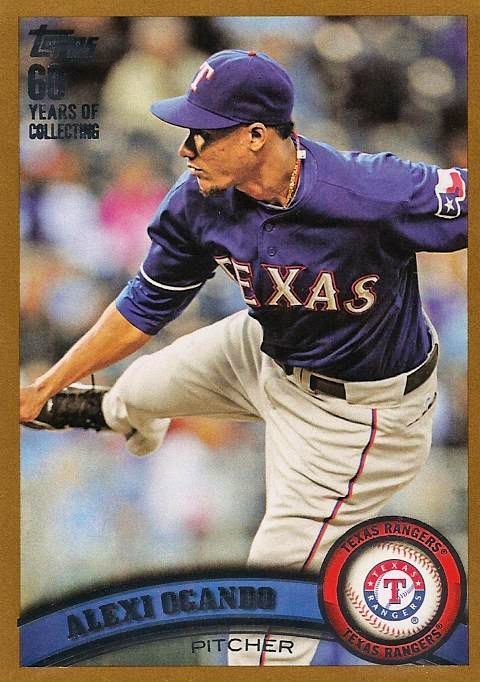 Last night's game against Seattle was encouraging on several fronts. First, it was a win and got the Rangers back to .500. With the current pitching and hitting problems .500 is an achievement.

Robbie Ross made the start and got the W. I can't find a card of him or he would get today's card. Robbie hurled 7.2 scoreless innings to get his first win and lower his season ERA to 1.00. Not too shabby for a guy making the move from the bullpen to the rotation. Ross is a bright spot on the mound for Texas.

Taking over for Ross was Alexi Ogando, shown here on card US190 of the 2011 Topps Gold set. Alexi only pitched a third of an inning but he did not allow the runner he inherited from Ross to cross the plate. Considering some of his early struggles this season, that is a good sign. Perhaps the old Ogando is back. Neal Cotts came in to finish the game off because it was no longer a save situation. He did not allow any runs to score either. A good night from the pitching staff and a combined shutout of the Mariners.

On the offense side of things Prince Fielder hit his first home run of the season in the second inning. It ended up being his only hit of the night but it gave the Rangers a lead they never gave up. Hopefully Fielder's bats will heat up soon. Coming up right behind Fielder, Kevin Kouzmanoff hit his first long ball of the season. Kouzmanoff has been on fire since the Rangers called him up. It would be great if he can keep it up at least until Adrian Beltre returns from the Disabled List next week.

The offense put three more runs on the board in the bottom of the eighth to run the final score to 5-0. Very nice to see the late inning outburst. If they can repeat tonight against Felix Hernandez, and Yu Darvish keeps his momentum going, things could end up looking real good.
Posted by Spiff at 11:09 AM