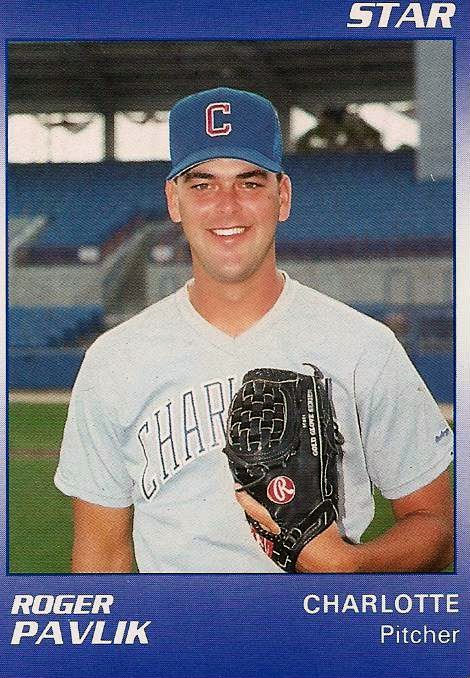 Roger Pavlik, shown here on card 19 of the 1990 Star Charlotte Rangers team set, was a second round pick for the Rangers in the 1986 draft. He didn't start his pro career until the 1987 season.

Three years later Roger started the 1990 season with the A+ Charlotte Rangers. He made 11 appearances for Charlotte, all starts. In 66.1 innings Pavlik compiled a 2.44 ERA and a 1.357 WHIP. He also struck out 76 opposing batters while giving up just 40 walks. Those numbers gave him a 5-3 record and a mid-season promotion to Double A Tulsa.

Pavilk made 16 starts for Tulsa and pitched 100.1 innings. The work seemed to agree with him as his ERA actually lowered to 2.33. Some of that was due to luck though as his WHIP crept up to 1.365. The strikeouts continued but he was able to whiff just 91 while walking 71. The Double A batters had a better eye than the Single A ones.

Roger's reward was a 6-5 record and a chance to start the 1991 season at Triple A Oklahoma City. After some early struggles it looked like Roger Pavlik was on his way. If he could translate his Double A success to the next level he would very likely get a shot at pitching in Arlington.
Posted by Spiff at 10:35 AM