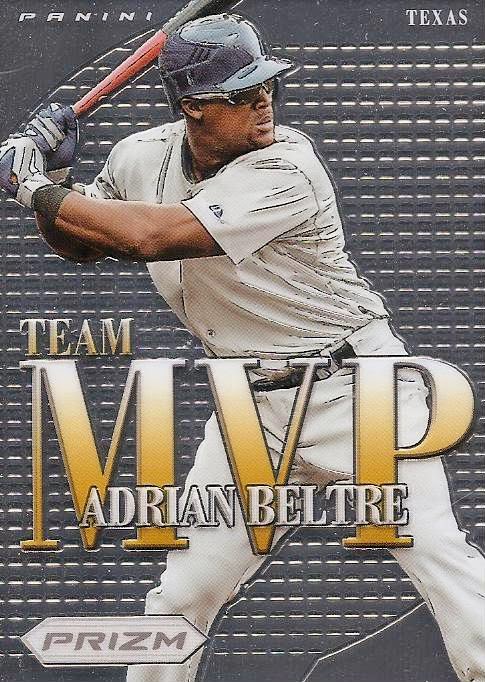 Last night's game in Boston was full of good news and bad news.

First on the good news side was that the Rangers won. Bad news was the 10-7 score. Starter Martin Perez went 6.1 innings in the game and got the win. That was good. He allowed four earned runs and that was bad. Also bad was the three runs coughed up by closer Joaquin Soria in the bottom of the ninth.

The offense finally seemed to come alive and that was good. Prince Fielder and Adrian Beltre, shown here on card MVP28 of the 2012 Prizm set, found their bats. That was good. Manager Ron Washington lifted Beltre from the game in the fifth inning with tightness in his left quad muscle. That's bad. The team flew Beltre back to Texas after the game to get further evaluation for a possible muscle strain. That's real bad.

Today the Rangers called up Kevin Kouzmanoff from Triple A and designated pitcher Seth Rosin for assignment. That indicates they expect the news on Beltre to get worse. I guess when the injury bug bites, he just keeps chomping away.

On a bit brighter note, Matt Harrison made a rehab start in Frisco yesterday. He went 4.2 innings and apparently looked real good. The club says he's still on track for a late April return. Colby Lewis also appears to be on track. The Rangers are expected to call him up in the next couple of days. It's looking like he will start Saturday when the Astros come to town.

Obviously the loss of Beltre will be a huge blow to the Rangers. Hopefully the pitching staff can get the kinks worked out and the re-enforcements plugged in to hold the line until Adrian can return to bolster the offense.
Posted by Spiff at 1:32 PM