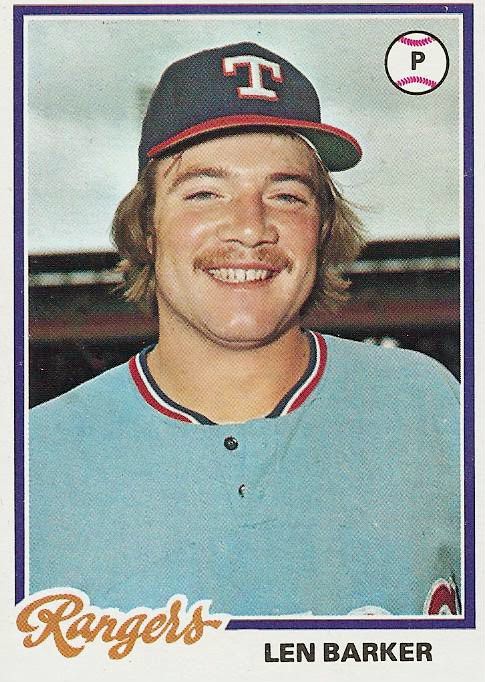 It seemed that Len Barker, shown here on card 634 of the 1978 Topps set, had a lot to be optimistic about heading into the 1978 season. Perhaps that's why he's smiling so big on this card.

After all, 1978 looked to be Barker's year to make his final break into the Majors. He'd had a cup of coffee with Texas in 1976 and split his time between Triple A and Arlington in 1977. Perhaps he could get a permanent spot in 1978. The Rangers thought he might. They liked what they saw in 1977. During one of his appearances in Arlington they clocked Len's fastball at 96 miles an hour, just a mile slower than they registered Nolan Ryan at the same year when the Angels were in town.

Barker did indeed spend most of the 1978 season with the Rangers, a short stint in Triple A not withstanding. He appeared in 29 games for the Rangers in 1978, all out of the bullpen. Over the 52.1 inning he pitched, Len compiled a 4.82 ERA and a 1.758 WHIP. Those numbers were nothing to smile about.

Len Barker still had promise. Texas either didn't see it or didn't have time to wait. They traded Barker and Bobby Bonds to the Cleveland Indians on October 3, 1978 for Jim Kern and Larvell Blanks. As for Len, he went on to develop well with an All-Star appearance and a perfect game to his credit before injuries forced his retirement in 1987.
Posted by Spiff at 10:58 AM