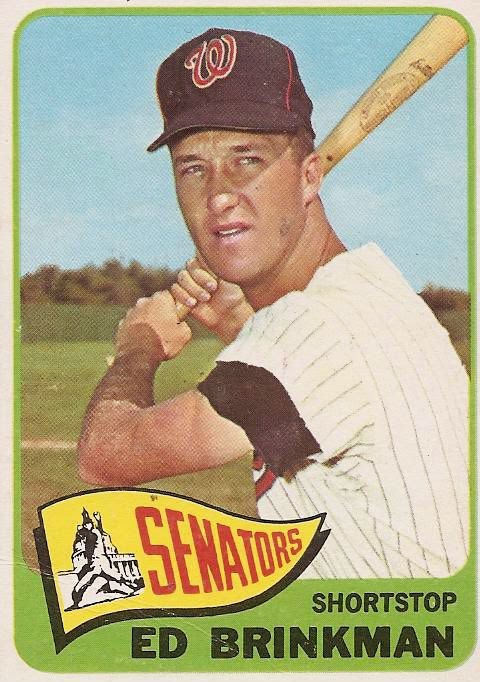 Ed Brinkman shows off his farmer's tan today on card 417 of the 1965 Topps set. Coming out of the 1964 season Brinkman had one big area he needed to improve on, his offense. In '64 he was the lightest hitting Washington regular. Perhaps that was due to his arm size. Whatever the cause, the Senators would like to see him improve.

Ed would appear in 154 games for the Senators in 1965, he played in the field in 150 of those games. That made him the most often used player on the team.

Appearing only at shortstop, Brinkman was still the go-to guy at that position for Washington. In 1177.1 innings he saw 686 chances. He muffed 25 of them for a field percentage of .964. That was a five point drop from 1964 but still two points better than the league average. It also dropped him out of his role as the best man on defense among the starting nine.

Brinkman made 492 trips to the plate in 1965. He posted a woeful .185 batting average and .251 on-base percentage. Both, along with his .257 slugging percentage, were the lowest of any regular Senators player. Amazingly, Ed still hit 13 doubles, two triples, and five home runs.

1965 was not a good year for Ed Brinkman. He saw his reputation as a slick fielder take a hit and his bat almost completely disappeared. That was a concern. So far the front office had concerned itself with overhauling the outfield and pitching staff. If Ed couldn't get his bat at least respectable he might soon catch their attention and end up the target of an improvement himself.
Posted by Spiff at 11:24 AM

Brinkman's batting average saw a major improvement during the years when Ted Williams was his manager.

After he was traded to the Tigers, he slipped back under the Brinkman Line.

I know. It has always amazed me that he hung on as long as he did in the Majors.