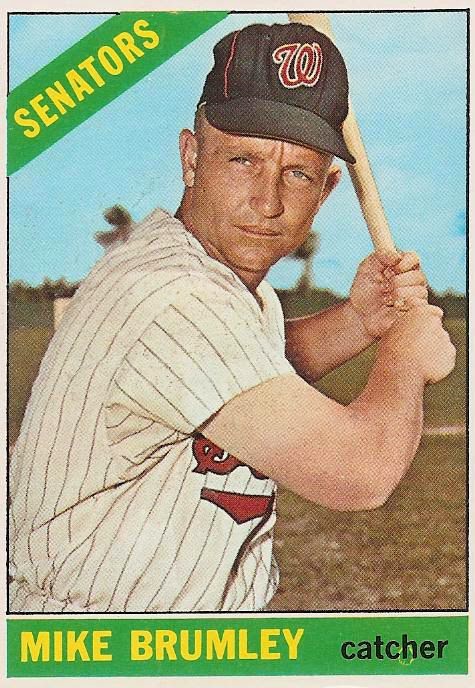 1966 was a rough year for Mike Brumley, shown here on card #29 of the 1966 Topps set. Breaking into the Majors in 1964, Mike served as the Senators starting catcher that year. In 1965 he was the most often used backstop in a platoon situation with Doug Camilli. Several other young catchers also made appearances that year for Washington. The least-used was a young Paul Casanova.

Liking what they saw from Casanova in his 1965 cameo, the Senators made him their starting catcher in 1966. To add insult to injury for Mike Brumley, Doug Camilli served as Casanova's backup. Mike Brumley was the extra wheel.

Extra wheels usually get stored somewhere and Mike was no exception. He spent the majority of the 1966 season at Triple A Hawaii. He did get into nine games with Washington and made 18 plate appearances. His .111 batting average and identical on-base percentage were not calculated to get him more playing time.

It looked like Mike Brumley's shot at catching for the Senators was past. 1966 appeared to mark the end of the professional road for Mike. It wasn't though. After not playing in 1967 and 1968, Brumley attempted a come-back with the Astros. He played two seasons at Double A in the Houston farm system before hanging up the spikes and mask for good following the 1970 campaign.
Posted by Spiff at 11:05 AM