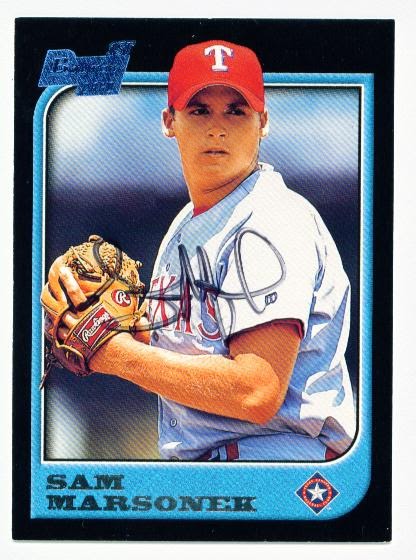 I'm still a Rangers fan and I'm still following the team. No bandwagon moves here. Still, it's hard to come up with positive things to blog about when the team is a game below .500, in fourth place, and eight games out of first. Sometimes finding a subject for a post can require some real creativity.

Makes things even harder when all the familiar names seem to be hitting the Disabled List and the team is grabbing guys from the minors to try and hold the line. Yesterday Alexi Ogando headed to the DL. Sometimes I listen to a game, hear a name, and think who?

Sam was the Rangers first round pick in 1996 when they drafted him right out of high school. Fans usually hear about first round picks but I wasn't really following baseball in 1996. Marsonek lasted in the Texas farm system until 1999 without ever getting above Single A. In December of 1999 the Rangers sent Sam to the Yankees in the Chad Curtis trade. He pitched in relief in one game for New York in 2004 and that was it for his Major League career.
Posted by Spiff at 2:15 PM