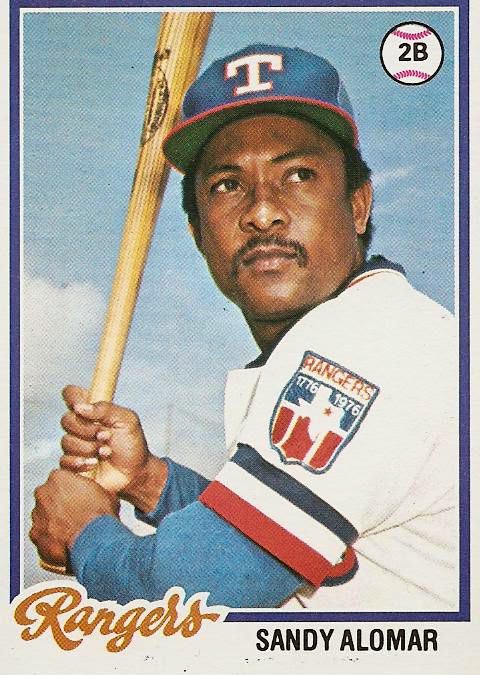 By the time Sandy Alomar appeared on card number 533 of the 1978 Topps set he had been in the Major Leagues for all or parts of 14 seasons. Most of Alomar's time had been in the National League but he'd been with Texas in 1977 during their push for the American League West crown.

Nicknamed The Iron Pony, Alomar was aging by 1978 and served the team as a pinch-hitter and utility player. He would appear in just 24 games.

In the 32 plate appearances Sandy made he posted a .207 batting average and a .233 on-base percentage. His only extra base hit of the year was a double.

Aside from pinch-hitting and serving as the designated hitter, Alomar also put in time at first base, second base, short stop, and third base. In the 84 innings he played on defense Sandy made just two errors, both on the right side of the infield.

Sandy Alomar was still proud of his glove but his bat was obviously gone. The Rangers liked him because he was a good mentor for their younger players. That worked for Alomar since he wanted to move into coaching after his playing career. The way things were going it appeared that move would happen sooner rather than later for The Iron Pony.
Posted by Spiff at 9:15 PM