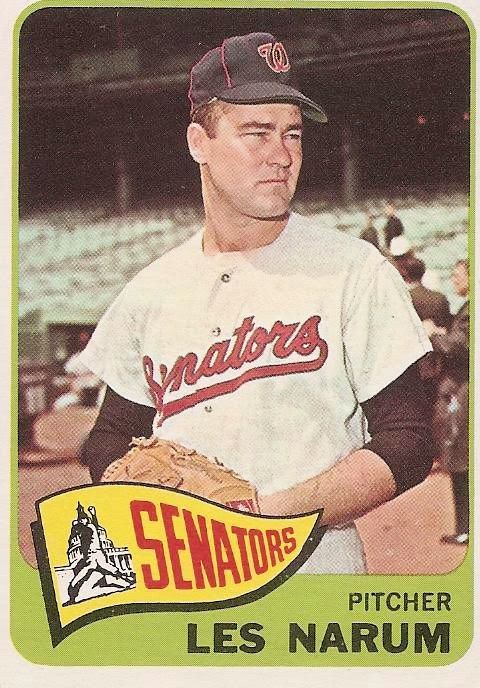 Leslie Ferdinand Narum arrived in Washington on March 31, 1964. His late arrival is probably the reason card number 86 in the 1965 Topps is his first Senators card. The Senators sent a player to be named later to the Orioles for Narum. In August they finally completed the deal by send a young minor leaguer named Lou Pinella to Baltimore.

Buster Narum was primarily a starter and made 32 starts for the Senators in 1964. His nine wins were second only to Claude Osteen on the staff. His 4.30 ERA and 1.347 WHIP indicated his wins might be more the result of luck than skill.

With all the pitching upheaval going into 1965 it looked like Narum had a good shot at the starting rotation. Instead he served more as a swingman, making 24 starts in 46 appearances. Combined he tossed 173.2 innings during the season and ended up with a 4-12 record. His ERA tallied to 4.46 and his WHIP to 1.537. Both numbers were higher than in 1964 and neither was calculated to help a pitcher lock down a spot in the rotation.

1965 was not kind to Narum. With Osteen gone the Senators needed help in the starting rotation. Les didn't provide much. Indeed, he would be lucky if he was able to put on a Senators uniform in 1966 instead of being sent to the minors.
Posted by Spiff at 11:25 AM