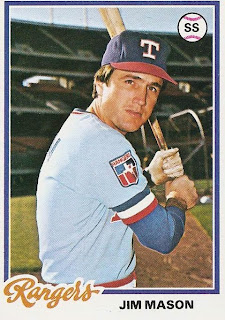 Jim Mason, shown here on card 588 of the 1978 Topps set, was in his second stint with Texas when this photograph was taken. Interestingly, both of his times with the Rangers were impacted by Toby Harrah.

The Senators brought their former second round draft pick (1968) with them to Texas. Limited playing time in 1972 and 1973 made it clear that Mason was blocked at shortstop by Harrah. In December of 1973 the Rangers sold Jim's contract to the New York Yankees. 1974 was his first professional season outside the Senators/Rangers organization.

The time away from Texas gave Mason a chance to play in the World Series in 1976 and hit a home run in his only World Series at-bat. In November of 1976, the newly former Toronto Blue Jays grabbed Jim in the expansion draft. He would start the 1977 season with them.

Going into 1977 the Rangers moved Toby Harrah to third base to make room for the newly signed Bert Campaneris. This move left Roy Howell without a home. Texas was hoping Howell was their third baseman of the future but he never jelled. Now he was available. The Rangers needed to move Howell and would like a backup to Campaneris. The Jays needed a third baseman. On May 9, 1977 Mason returned to Texas in a trade for Howell that also involved Steve Hargan and $200,000.

Mason spent the rest of 1977 in a backup role and was expected to spend 1978 in the same manner. However, Campaneris struggled in his second season with Texas and Jim saw more action than expected.

Jim made 116 trips to the plate in 1978 for Texas. He posted a dismal .190 batting average and a .227 on-base percentage. He hit just four doubles with no other extra base hits.

Had Jim's bat been even average, he might have carved out more playing time for himself in 1978. He was only about four points ahead of Campaneris though and his glove was way behind. That was not a formula for displacing Campy. Things were unsettled at short for Texas however. Mason had an uphill road but there was an outside chance he could make a play for the position in 1979, if the Rangers held on to him.