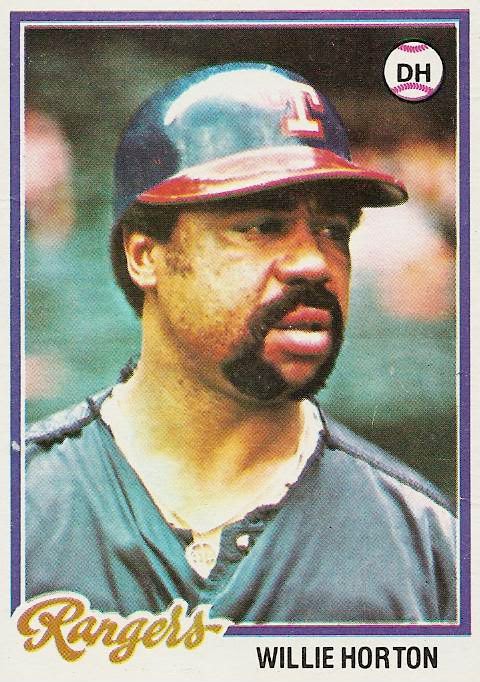 Willie Horton, shown here on card 290 of the 1978 Topps set, was the fore-runner of Vladimir Guerrero. Willie came and went via trade while Vlad was through free agency. Just like Vlad, Willie came, hammered, and left in the blink of an eye.

The Rangers sent pitcher Steve Foucault to the Tigers on April 12, 1977 in exchange for Horton. Apparently the Tigers thought their long-time slugger was done.

Serving primarily as the designated hitter, Horton appeared a few times in left field without accolades. He stepped up his offense though and hit .289 with an on-base percentage of .337 while knocking 23 doubles, three triples, and 15 home runs. He scored 55 runs and collected 75 RBI.

After one season of providing a key part of the power to a contending team, Willie Horton was gone. On February 28, 1978 the Rangers traded Horton and David Clyde to the Cleveland Indians for Tom Buskey and John Lowenstein. The team re-acquired Willie in a December 12, 1980 trade with the Seattle Mariners but released him on April 1st of the same year without a single plate appearance.
Posted by Spiff at 1:23 PM