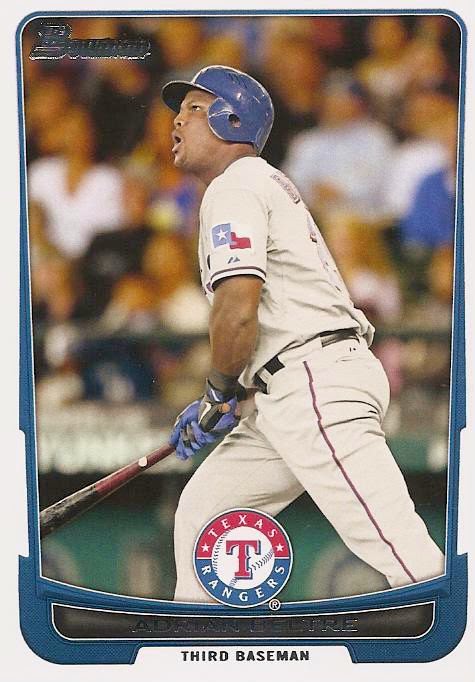 Adrian Beltre, shown here on 2012 Bowman card 95, was awarded his fourth Silver Slugger award yesterday. It puts him the company of Matt Williams, Mike Schmidt, and Wade Boggs as the only third basemen to win the award four or more times.

It is particularly nice to see Beltre win a Silver Slugger this year. Of course, the whole season was a real downer so it helps a little with that. It's also great that he could pull it off with little to no support or protection in the lineup. Imagine what he could have done if he had a decently big bat behind him. A batting title perhaps?

Well, it's early November and Christmas is still a long ways off it seems. It'll be here before you know it though and that's why I'm starting to think about my end of year team giveaway packages. Same as last year, I have no Rangers, Royals, or A's available. I also don't have any Pirates, Dodgers, or Angels right now. Pretty much all of the rest of the teams are available. Would really like to see somebody claim the Giants, Orioles, and Cardinals in particular. If you're interested in free cards of your team, just let me know. Drop me an email or leave a comment with your name, address, and team preference. I'll try to make sure there's no doubles in the lot but it will be a pretty varied lot as far as years and brands. Same as last year, if you want to sign up a friend or fellow collector that is fine but only for teams they really want. No having me send Yankees to a Red Sox man.
Posted by Spiff at 11:20 AM

I love Beltre. He should be a hall of famer once his career is over. The cool thing is he is still putting up huge numbers. I remember reading a few weeks back that he has accumulated the 3rd most WAR among active postion players. Couple more big seasons and he could pass Chipper and possibly Brett in WAR all time for 3rd baseman. He has already passed Brooks Robinson, Molitor.

Beltre is a great player, no question. That said, he's really snuck up the charts on the statistical side. He doesn't have a lot of the "wow" stats in terms of leading leagues in anything hitting-wise, but he's had both a long enough career and a high enough peak to that career to merit inclusion.

He may have hurt himself some with going to that hitter's graveyard in Seattle, but he's doing well in the paradise that is Texas.