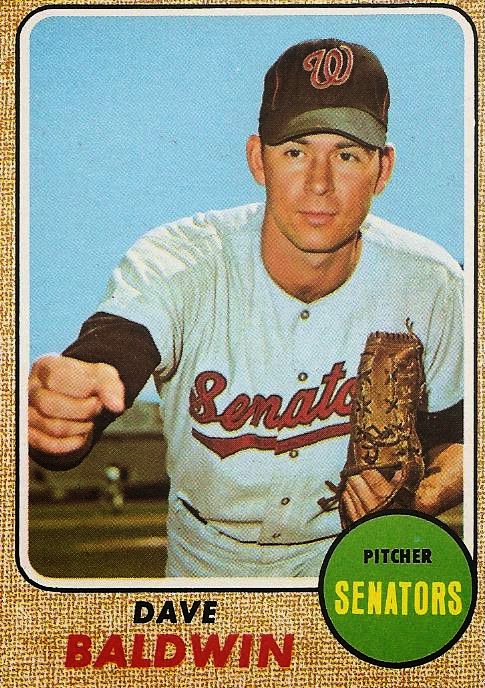 The picture on Topps 1968 card 231 puzzles me. I can't decide if Dave Baldwin is trying to pose like he just threw a breaking ball, if he's offering the photographer a fist bump, or if he's the fore-runner to Kenny Rogers going after the television camera-man.

Whatever the case, Baldwin had a fine rookie season in 1967 and looked to follow it up in 1968. A career long reliever, Dave appeared in 40 games for Washington in 1968 and pitched a total of 42 innings.

Something went dreadfully wrong during those 42 innings of work. Baldwin's ERA soared to an unsightly 4.07 and his WHIP took a jump to 1.238. In 18 fewer innings of work, he allowed five more home runs than the previous season. Dave got saddled with two losses and picked up no wins.

Probably as a result of his stumbles, Baldwin spent part of the year with the Triple A Buffalo Bisons. He pitched 17 innings over ten games there and put together a 3.71 ERA and an 1.765 WHIP. Neither number was impressive at all.

For Dave Baldwin, the Year of the Pitcher wasn't. For some reason the wheels came off the wagon for him. He needed to get the 1967 form going again or it was going to be difficult to nail down any sort of regular role in the Washington bullpen in 1969.
Posted by Spiff at 11:19 AM