Young moves to the front office. 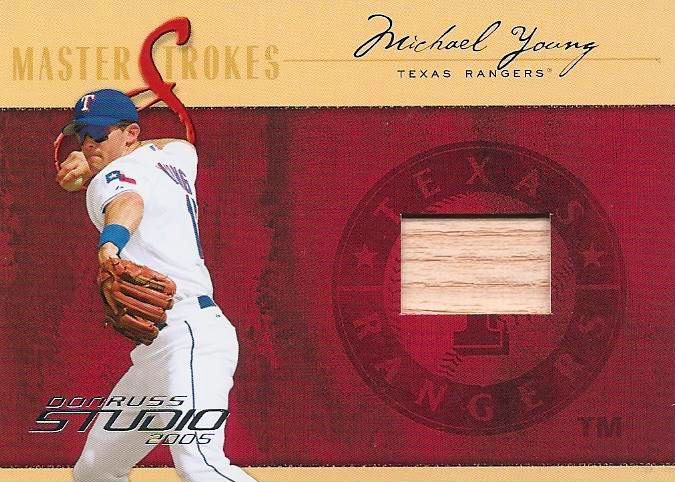 Michael Young has officially returned to the Texas Rangers. Young helped interview managerial candidates earlier this year and has been assisting in various roles. Yesterday the team announced his appointment as a special assistance to General Manager Jon Daniels. This is a real job and Young is probably going to be helping with player instruction as well as other assignments.

Good to see Michael back in the Texas fold. Apparently he was able to think things over after being traded and decided to patch it up with Daniels. Smart move on both sides.

Posting this 2005 Studio Master Strokes game-used card of Michael Young today to celebrate the news of his official entry into the front office side of baseball. This card is numbered 186/250 and was part of the lot recently sent to me by Matthew over at Bob Walk the Plank.

Also in the news is former Ranger Alfonso Soriano's announcement of his retirement as a player after 16 seasons. Soriano never really impressed me but he was a pretty good player for the better part of his career. Problem was, he knew he was good. Perhaps the biggest thank-you Rangers fans owe Soriano was that he replaced Alex Rodriguez on the team.
Posted by Spiff at 11:02 AM

I always wondered if Soriano would have changed his approach a little bit he could have been even better. Hard to knock a guy for 400 + homeruns, but he did it at the detriment of obp. At least his prime years were played during a time where big contracts were given for that type of production. In today's game he wouldn't even come close to that.

Yeah, he played the way he deemed best and it's hard to second guess a guy who played 16 years in the majors.

It sticks in my craw that he basically forced a trade by refusing to change positions for Texas then changed positions shortly after the trade.

Count me as another person who thought Soriano could have been so much better. I remember when he first came up with the Yankees, he would always bite at an outside curveball. Strike three.