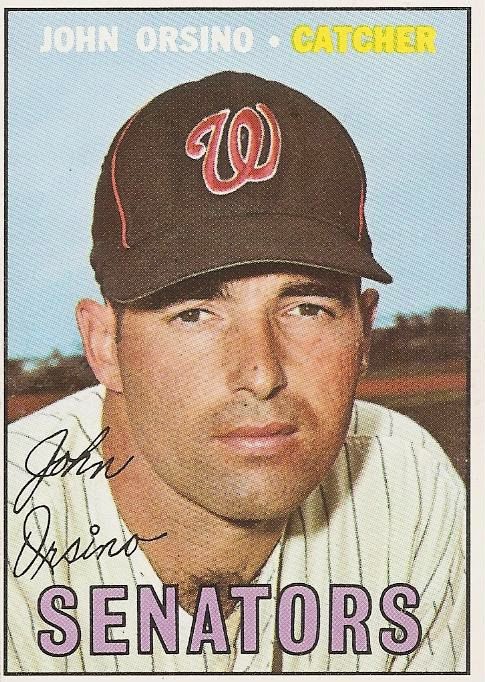 According to the back of card 207 in the 1967 Topps set, John Orsino spent most of 1966 on the Disabled List. Apparently he wasn't fully recovered by the time 1967 rolled around and missed the majority of the season once again.

Johnny spent most of his season with the Triple A Hawaii Islanders. That meant he played in 16 games there and made 52 plate appearances. He posted a .217 batting average and a .288 on-base percentage.

Orsino did get a short stint with Washington in 1967. He pinch-hit in one game and struck out. It was the final at-bat of his Major League career.

To start 1968, John found himself in Double A with the Savannah Senators. He managed to get one game in with the Triple A Buffalo Bisons before the season ended.

On January 8, 1969 the Senators sold Orsino's contract to the Yankees. On June 12, 1969 the Yankees sent him to Cleveland in a trade. John never played above Triple A for either club and hung up his spikes at the end of the season.
Posted by Spiff at 11:07 AM