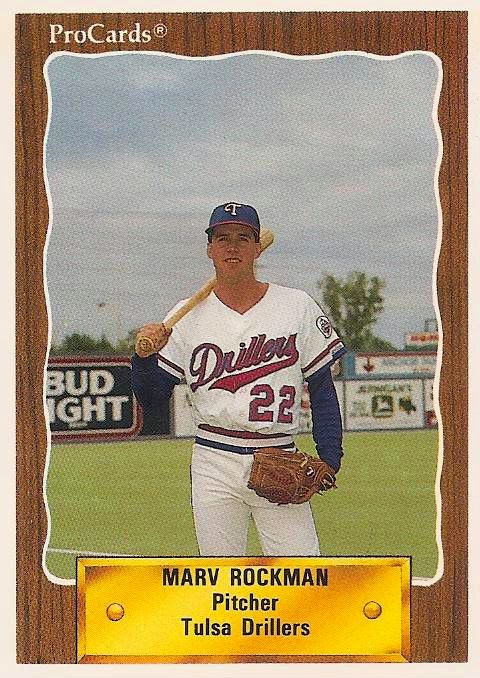 Marvin Ward Rockman shows off a unique pose for pitchers on card 1152 of the 1990 ProCards Tulsa Drillers team set. There's several more pitchers throughout the team set posing with both a glove and bat but I don't think I've seen that anywhere else.

The Rangers drafted Rockman in the 27th round of the 1987 draft. They immediately sent the 23-year-old to the Rookie League Gulf Coast Rangers. He did well there in 14 appearances and moved up to Single A with the Charlotte Rangers. A rough ten appearances there meant Marv started 1988 still at Single A, this time with the Gastonia Rangers. He did well in 43 games and made a late-season jump to Double A Tulsa where he posted a 1.08 ERA over six games. That earned him a Double A start to the 1989 season and he posted a 3.06 ERA over 40 appearances with Tulsa. Not good enough for another promotion. The brass decided Rockman would get one more season start at Double A to see if he could earn a ticket to Triple A Oklahoma City.

Strictly a reliever for his whole pro career, Marv made 24 appearances for the Drillers in 1990 and pitched a total of 38 innings. Both were lower numbers than the previous season. Unfortunately for Rockman, his 3.79 ERA and 1.553 WHIP were not lower numbers than in 1989.

By the end of the 1990 season Marv Rockman was 26 years old, over two years older on average than most of his teammates. His age combined with his failure to earn a promotion in two seasons is likely what led to his career ending when the season did.
Posted by Spiff at 5:02 PM