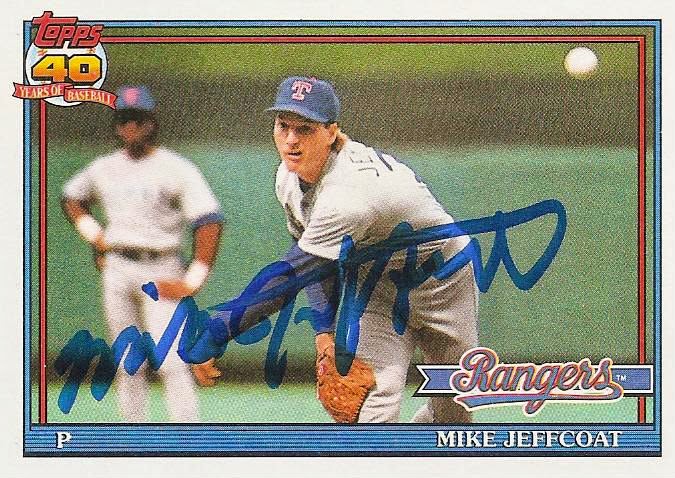 Welcome to the new year. I hope everyone had a safe and enjoyable celebration.

Lots of things to look back on in 2014 as a Rangers fan and collector. Some good, some not so good. Of course the injury-laden season for the team overshadows most everything else. Even in that were some bright spots though. Young, hungry players making their appearances and impressing. Ron Washington's resignation was also a downer. Tim Bogar's performance as his temporary replacement was impressive.

On the collecting side, I was able to add a significant number of Rangers to my collection. Completed quite a few team sets, updated my want list and trade list, and made serious headway on the Senators collection. Also made it out to the ballpark for a couple of games and scored a Pudge Rodriguez bobblehead at one contest. Spiff Jr and I made the 2014 Fanfest as well. Had a great time, toured the behind scenes areas of the ball park, and picked up some autographs. This signed 1991 Topps Mike Jeffcoat came from the 2014 FanFest. Also made some nice trades with fellow bloggers, managed to get some other teams' cards sent to good homes, and received a couple of very nice surprise packages from some great guys.

Looking ahead in 2015 it's looking like the Rangers could rebound. I don't expect the post-season but they should do much better than their MLB worst last season. Injuries hopefully in the past and some of the new kids battling for positions should make for an interesting and fun season. Would like to get out for a couple of games but that's a wait and see proposition. Already have tickets ordered for the 2015 FanFest on the 24th of this month. Looking forward to it. If anyone else is going, let me know. Maybe we can meet up in person.

On the collecting front I would like to continue to get other teams cards out to folks who will appreciate them. I also have some non-Rangers Ivan Rodriguez memorabilia that I would like to get out of the way. Finishing off at least two Senators team sets and ten Rangers team sets would be nice. I would also like to add autographs from at least three players I don't already have. I have a few other collecting goals as well but don't want to bore you.

Happy New Year and best of luck on your collecting and non-collecting goals for the coming year. May God bless and keep you and yours!
Posted by Spiff at 10:39 AM

Happy New Year! Looking forward to some more swapping in 2015