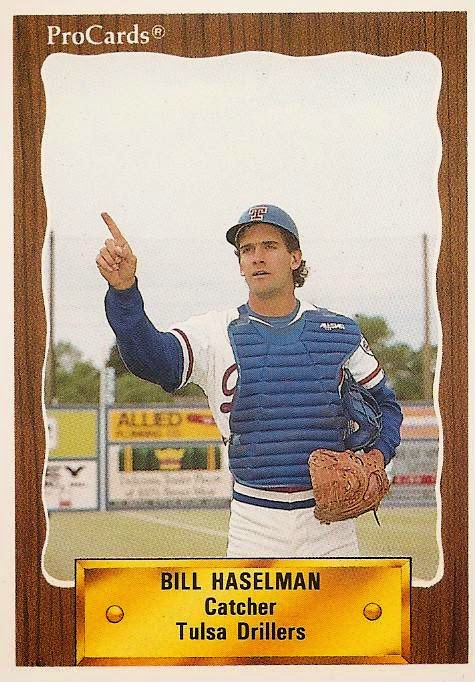 The Rangers drafted Bill Haselman, shown here on card 1158 of the 1990 ProCards Tulsa Drillers set, in the first round of the 1987 draft.

Haselman started his career at Single A in 1987 and spent two seasons there. He got moved up to Double A to start the 1989 season and stayed there for the 1990 season as well. Haselman's climb up the minor league ladder was delayed by shoulder surgery in 1988 and the subsequent recovery time.

Bill played in 120 games for Tulsa in 1990. He caught 109 of those games with occasional appearances in the outfield, third base, and first base. He was primarily a catcher though. Haselman saw 786 chances behind the plate and committed 20 errors for a fielding percentage of .975. Of concern, he also allowed 20 passed balls.

When the rosters expanded in September of 1990, the Rangers decided to see what they had in Bill Haselman. After all, there were a couple of other young catchers coming up and decisions would have to be made. Bill got the call-up and made his Major League debut on September 3, 1990.

For the rest of the season Bill would appear in seven games for the Rangers and get 14 plate appearances. He struggled to a .154 batting average and a .214 on-base percentage. He had no extra base hits. Apparently the pitchers were better in the Majors than at Double A.

Most of Haselman's time in the Majors in 1990 he appeared as the designated hitter or as a pinch-hitter. He did get to catch in one game though and put in four flawless innings behind the plate. Following the season, Bill got an invitation to Spring Training 1991 to show what he could do.

Between his Major League cup of coffee and Spring Training, the Rangers saw enough to make a decision on Bill Haselman. They kept him, for the time being, but sent him to Triple A Oklahoma City for the 1991 season. Young Ivan Rodriguez would get the nod in 1991 and that would spell trouble for Bill Haselman and a generation of minor-league catchers in the Rangers system.
Posted by Spiff at 10:19 AM