Yup, I missed it. 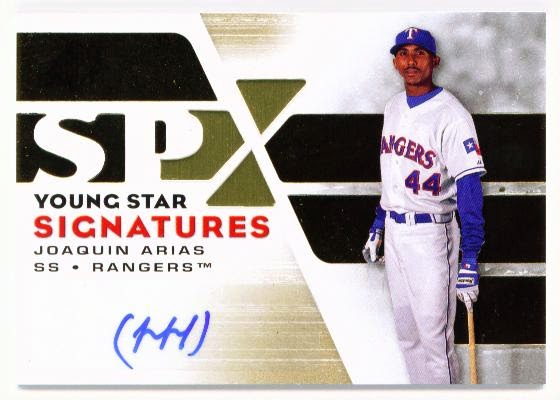 Today we have former Ranger Joaquin Arias and his autograph appearing on a 2008 SPx Young Star Signatures card. Why this card today? Well, it's seven years old this year.

You see, I'm bad about remembering important information. If I don't write it down, I won't remember it. Dates are really bad. Can't remember my kids birth dates, extended family birthdays or anniversaries, and very few other important dates. I even forgot one personally important anniversary last week. No, not my wedding anniversary, that's safely written down on multiple calenders. I missed TRC's anniversary.

Seven years ago, on January 15, 2008, I made the first post on Texas Rangers Cards. Since then I've had a great time meeting other bloggers and card collectors, sharing why I enjoy collecting and hearing why you do as well, and even interviewing (by email) a former player (minor league). Posts have ranged from personal stories to well-known accounts from Rangers history. I've written about career minor-leaguers, little-leaguers, MLB superstars, fallen heroes, villains, heroes, common players, and even a murderer. I've gotten a few bucks from sponsors, some free clothing in exchange for an ad, and a free copy of Strat-O-Matic. That got me hooked on that great game and gave me, my dad, and Spiff Jr hours of time together. I've also picked up some great memories, lots of knowledge of baseball and the Rangers, and great cards from other collectors.

I put out 270 posts that first year, probably only one or two worth reading. The only one or two posts worth reading became a yearly occurrence. The number of yearly posts has not held that steady. 2010 was the high-water mark so far as I posted 300 times while the Rangers were en route to their first ever World Series appearance. 2013's 135 posts were the lowest so far as I struggled with a new job and re-locating the family across two state lines. 2014 was the highest number of posts in three years as things finally evened out. Hopefully I can keep the train on track this year and the posts coming at least that often.

I appreciate the readers (some of whom are friends I have never met in person) who stuck out the lean times and the terrible writing over the past seven years. I am equally grateful for anyone who joined up along the way and stayed for the ride. I always enjoy comments and feedback if you care to let me know what you like or dislike. Please let me know if you have any suggestions for future posts or series. Can't promise I'll use it right away but I rarely turn down a suggestion. Thanks for sticking around, commenting, trading, and just enjoying the Rangers and their baseball cards with me.
Posted by Spiff at 10:52 AM

Congrats on the belated anniversary post. It's been a fun ride. Hopefully we can hook up for a game this year!

Congrats on the anniversary. Glad we hooked up for some trading!

It's always great to see one of the first card bloggers I knew still blogging. Congrats.

Congrats on the anniversary!

Thanks guys. I really appreciate all the support (and trades).

PATP - you going to the FanFest this Saturday? If so drop me an email, maybe we can meet up.