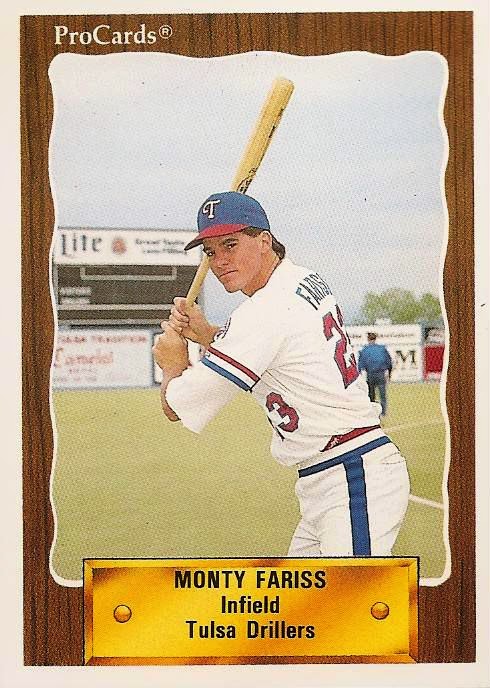 Monty Ted Fariss appears today on card 1161 of the 1990 ProCards Tulsa Drillers team set. It's been awhile since we last saw Monty. He was just leaving his college career after being drafted by the Rangers in the first round of the June, 1988 draft.

Fariss started his pro career in 1988 with the Butte Copper Kings but was promoted to Double A Tulsa before the end of the season. He also spent the 1989 season with the Drillers.

Monty began the 1990 season with Tulsa as well. He played in 71 games, all at short stop. He compiled a .932 fielding percentage and made 282 trips to the plate for the Drillers. In those plate appearances Fariss put together a .299 batting average and a .391 on-base percentage. Monty was classified as a shortstop with power and his .496 slugging percentage was the result of seven home runs, six triples, and 15 doubles.

In spite of the obvious defensive flaws, Fariss earned a mid-season promotion to triple A Oklahoma City. He played in 62 games for the 89er's, mostly at short but with a smattering of appearances at first, second, and third bases. His defensive struggles continued as he posted a identical .932 fielding percentage at short stop. Fortunately for Monty, his offensive surge continued as well. In 261 plate appearances with OKC he upped his batting average to .302 while keeping his on-base percentage at .391. His slugging percentage dropped to .436 but he still hammered twelve doubles, three triples, and four home runs.

Monty Fariss seemed to be doing well with the offensive side of the game but his bat could only carry him so far. He needed to work on his defense. Expanding his range and shoring up his fielding percentage would had to be the priority items on his list for 1991. He would have time to work on both. The Rangers, suspicious of his glove, assigned him to start off 1991 with OKC.
Posted by Spiff at 11:12 AM