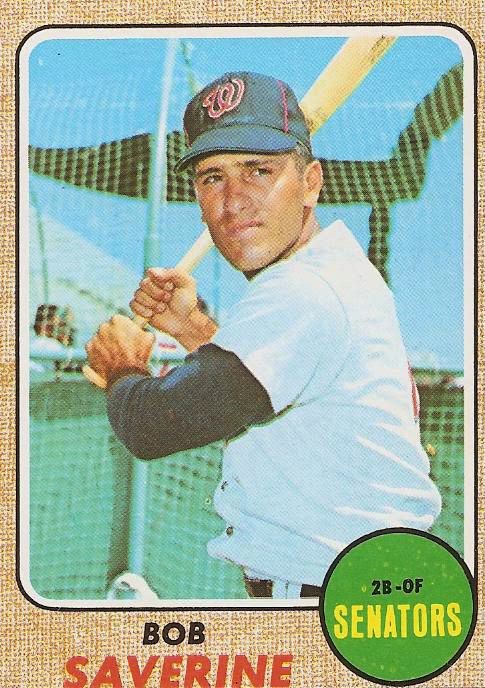 Bob Saverine, seen here on card 149 of the 1968 Topps set, had suffered a down year in 1967. The closest thing he had to a set position that season was his platooning situation with Bernie Allen at second base.

Bob didn't make the Senators roster in 1968, having been fully displaced by Allen at second and squeezed out by better bats in the utility role.

Assigned to Triple A, Saverine spent his 1968 season with the Buffalo Bisons of the International League. He would appear in 120 games for them.

Even in the minors Bob had a hard time nailing down a regular spot. He played short stop in 61 games, second base in 55 games, and third base in six games. His glove work continued to be sub-par as he posted a .953 fielding percentage at short and a .955 fielding percentage at second. He only saw five chances at third and handled all of them without a problem.

Saverine made 506 trips to the plate for the Bisons in 1968 and managed a .243 batting average and a .310 on-base percentage. Both were improvements over his 1967 effort with the Senators but neither was larger than could be accounted for by the lower level of competition. Disturbingly, Bob whiffed 71 times while walking just 44 times. Those are power hitter numbers. Saverine's 15 doubles, eight triples, and five home runs proved he wasn't a power hitter. His speed also seemed to be ebbing as he got caught stealing 12 times and only had 16 successful thefts.

1968 had not been the bounce-back season Bob Saverine needed. He had to blow the doors off Triple A if he wanted to get back to Washington. That hadn't happened. Evidently either Bob or the Senators decided it would not happen. 1968 was Bob Saverine's last season as a professional ball player.
Posted by Spiff at 10:23 AM