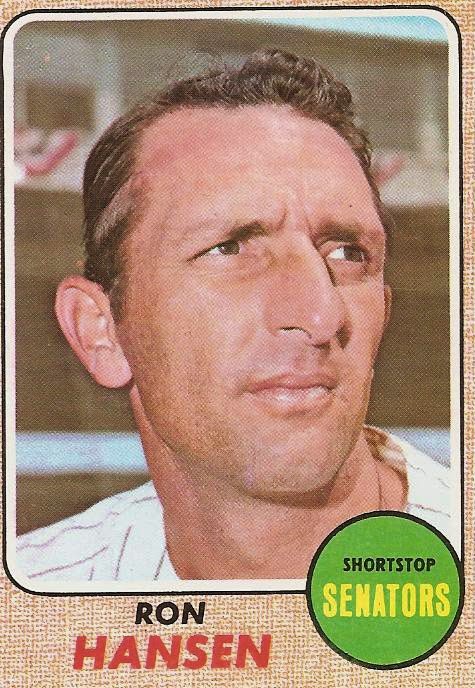 Long-time White Sox member Ron Hansen appears hatless and still in his Chicago pinstripes on card #411 of the 1968 Topps set. Apparently Topps didn't have time to get a photo of Hansen in a Senators uniform following the February 13, 1968 trade that brought him to Washington. The Senators sent Tim Cullen, Buster Narum, and Bob Priddy to the ChiSox in exchange for Hansen, Dennis Higgins, and Steve Jones.

The Senators most likely traded for Hansen to try and fix their offensive problems at short stop. After all, his career batting average coming to Washington was .236 as compared to Ed Brinkman's .210. Besides, Ron could hit for power better than Ed.

The Senators practically gave Ron Hansen the starting shortstop job in 1968. In the 86 games he played for Washington he spent 81 of them at short. The other five were at third relieving Ken McMullen. Hansen played 670.2 innings at short and committed 15 errors for a fielding percentage of .963. That was one point higher than the league average but four below Ed Brinkman's. Ron did have a little more range but that was offset by the field percentage.

On offense is where the Senators expected the most difference. They sent Hanson to the plate 315 times. He stumbled to a .185 batting average and a .281 on-base percentage. His power also dropped off as he hit just 12 doubles and eight home runs. More alarmingly, he struck out 49 times while walking just 35 times.

None of Ron Hansen's offensive numbers were significantly above Ed Brinkman's. The defense was about the same as well. The only noticeable difference is that Ron was four years older than Ed. The Senators decided there was no reason to stick with the aging veteran over the guy who had been with the team for seven seasons and was still only 26 years old. On August 2, 1968 Ron Hansen found himself headed back to the south side of Chicago. The Sox sent Tim Cullen back to Washington in return. Hansen's rather disappointing time in Washington was over and Ed Brinkman had his spot at short back.
Posted by Spiff at 10:41 AM

As soon as Brinkman was traded away to Detroit a few years later, he settled back into mediocrity.