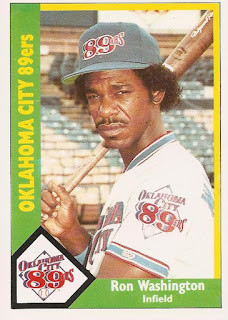 The thing about flipping through old minor league cards is you never know when you'll come across a familiar face. Ron Washington, shown here on card 165 of the 1990 CMC set, is well-known to Rangers fans as the manager who finally got the team into the World Series.

The Rangers in the World Series was still 20 years distant in 1990 and Ron Washington had been granted free agency after a cup of coffee with the Houston Astros in 1989. The Rangers signed him to a minor league contract, probably with the idea he could mentor younger players. Wash's career as a middle infielder with the Twins was in the rear view mirror and he was not impressive in 1989 with Houston.

Ron played in 101 games total for Oklahoma City in 1990 and made 364 trips to the plate. His bat was failing him as he walked just five times and struck out 60 times en route to a .238 batting average and a .248 on-base percentage. He did hit 15 doubles, six triples, and a home run.

The designation of infield on the front of Washington's card is very appropriate. During the course of the season he made 50 appearances at short stop, 19 at second base, 13 at third base, ten at first base, two as catcher, and even pitched in three games. It was Ron's first experience pitching in his pro career. Over the three innings he pitched Washington tallied a 6.00 ERA and a 2.667 WHIP. He didn't get a decision but did manage to strike out one batter.

1990 was about what was to be expected at the tail end of Ron Washington's career. He had never been a star player but he was a smart one. Smart enough to know this was the end of the line on the field. Wash hung up the spikes after the end of the 1990 season. By the start of the 1991 campaign he was embarked on the second half of his career, joining the coaching staff for the Tidewater Tides in the Mets farm system.
Posted by Spiff at 8:42 PM