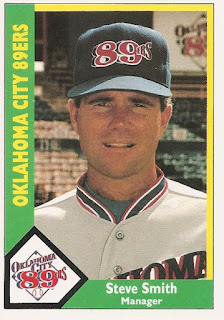 89ers manager Steve Smith appears on card 171 of the 1990 CMC set today. Steve's looking a bit unimpressed with the prospect of having his picture taken for a baseball card.

1990 was Smith's first year with the Rangers organization. In 1976 he was drafted by the San Diego Padres. He played in their system through the 1982 season, never getting above Triple A. The Padres must have seen something they liked though. In 1983 Smith started his managerial career with the Padres Single A affiliate. He put in three seasons at Single A, two at Double A, and two more at Triple A.

After 14 seasons in the San Diego system, Smith took the job as the manager for Oklahoma City for the 1990 season. He would lead the team to a 58-87 record. Apparently that wasn't what somebody was looking for. I'm not sure if the change was the Rangers idea, or Smith's, but he was gone after just one season.

1991 found Steve managing the Mariners High A club. He didn't manage in 1992 and 1993. In 1994 he again took the reins, this time with Seattle's Triple A affiliate. He was there for two seasons before dropping off the radar again. A season with the Brewers Triple A club in 2000 rounded out his managerial career.
Posted by Spiff at 7:43 PM